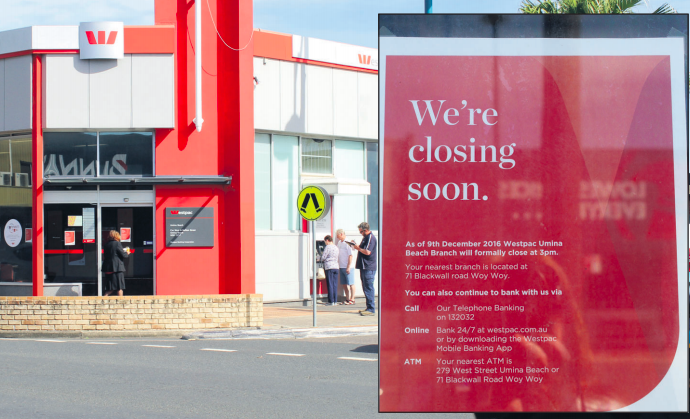 The Westpac branch in West St, Umina, and (inset) the notice in the window announcing the closure

Another of the big four banks in Umina will close its branch before Christmas this year, leaving just one major bank branch in Umina.

The Umina Westpac Bank Branch will close its doors on December 9, due to steadily declining numbers in over-the -counter transactions. “Fewer customers are visiting our branches these days, as more and more people choose to use digital banking channels like mobile banking, internet banking and smart ATMs,” said Westpac Group spokesperson Ms Lucy Wilson. “With over-the-counter transactions accounting for less than fi ve per cent of total transactions, we are closing the Umina branch and merging it with another Westpac branch at Woy Woy,” the spokesperson said.

Peninsula Chamber of Commerce president Mr Matthew Wales said the decision was corporate greed by one of the big four banks. “I am sick and tired of the big banks’ attitude to local retail centres and this decision by Westpac reinforces my view that the big banks are out of touch with local communities,” Mr Wales said. “The Westpac regional manager Mr Adam Wilson has confi rmed that the Umina branch will close in December, with all Peninsula banking operations being shifted to the Woy Woy branch in Blackwall Rd. “Unfortunately, I find it increasingly typical of the big banks that they seem to know best when it comes to customer service in main street shopping strips,” he said.

According to Mr Wales, Westpac made the decision to close their Umina branch following a review that found the branch lacked suffi cient customer support to justify keeping a shop front presence. “It is my view that once again the big banks are putting profi ts ahead of local services as a way of adding to the billions of dollars they already rake in from customers. “That’s all very good if you are a Westpac shareholder but the closure will leave Umina with one less bank, a vacant shop and the loss of a dozen jobs in the main street. “The departure of Westpac will leave Umina with only the Commonwealth Bank and we now have grave concerns as to its future in the main street,” Mr Wales said.

Mr Wales also said this was not the first time Westpac had let down customers in Umina, having closed the Umina St George Bank branch when they took over the company in 2008. “When Westpac took over St George, it subsequently closed the Umina branch, stripping the main street of front line banking services and forcing St George customers to go to Woy Woy to do their banking. “Westpac assured the local business community that they would maintain a presence in Umina.

“Now years later they are pulling the same stunt and forcing Umina customers to travel into Woy Woy to do their banking again.” Ms Wilson said that Westpac’s decision to close the branch was not made lightly. “The Westpac ATM at Umina will remain in place. “In the meantime, we encourage customers to visit the branch to get a free demonstration from staff on how to use online banking and the ATM if they wish. “Customers can also still access free face-to-face banking services at the Umina Australia Post offi ce including the depositing of cash or cheques, cash withdrawals and balance enquiries.” Mr Wales said: “It is the height of arrogance to suggest that an automatic teller machine is suffi cient for local customers in what has become one of the busiest main street retail centres on the Central Coast. “I can only hope that Westpac customers will shift their accounts to the Commonwealth Bank and keep local dollars in Umina,”

Mr Wales concluded. Westpac did not state whether or not Umina branch staff members would be redeployed or made redundant. Ettalong resident Mr David White, who has been banking with Westpac Umina for over 20 years, said the implications the branch closure would have on the Peninsula’s aged population were huge. “It’s very inconvenient for me as a vehicle owner to have to make the drive to Woy Woy and deal with the traffi c in the area just to do my banking,” Mr White said. “So how inconvenient will it be for pensioners who rely on public transport to get around or who can’t use technology to do their banking? “I use a passbook.

“I don’t own a credit card so I’m reliant on over-the-counter transactions to do my banking. “How many other people on the Peninsula are in this situation too? “It seems like Westpac just doesn’t care about its Umina customers. “The Umina Branch staff are very friendly and nice but the closure seems to be more about lining Westpac’s profi ts then customer service,” Mr White said.