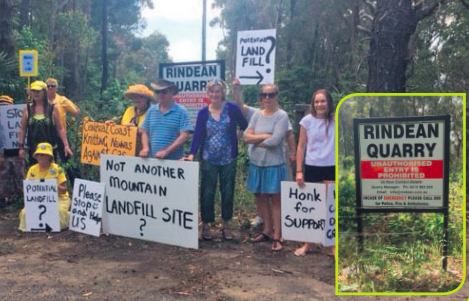 Somersby residents are campaigning against an application for the importation of 140,000 cubic metres of Excavated Natural Material (ENM) to the Rindean Quarry at 620 Wisemans Ferry Rd.

The 240,000 tonnes of excavation soil, according to the Section 96 application currently before the Central Coast Council, would be used to build acoustic bunds, rehabilitate and cap former tailings ponds and construct a road and wheel wash facility. Somersby resident, Ms Lynn Cowie, said: “This will increase the number of trucks to exponential levels, potentially 9,000 trucks along Wisemans Ferry Rd, as they only have four weeks to build the noise bunds.

“There is no traffic management plan or mention in the Environmental Impact Statement about importing nearly a quarter of a million tonnes of earth onto the site,” she said. “The soil they are importing is not virgin soil but excavated material from Sydney infrastructure projects and construction sites. “Rindean Quarries stand to make more money importing this ENM material opposed to Virgin Excavated Natural Material (VENM) and more money than selling the excavated sand it has approval to export.

“All soil being imported onto the site will need to be tested so it is not contaminated, but the company that does the testing is a NATA registered soil testing facility and the director of Rindean Quarries is also a director of that company. “It will be up to the general public to monitor what is happening on the site because the Environmental Protection Agency (EPA) doesn’t regularly check the material.” Ms Cowie said Somersby residents were concerned that it would be impossible to monitor activity on the site once the four to six metre noise bunds were built.

She said the 38 acre property has underground springs and creeks running through it. “One creek runs through Strickland State Forest to Narara Creek, so if contaminated soil made its way onto the site, it could pollute the waterways and get into the Central Coast drinking water supply,” Ms Cowie said. “We question why Rindean Quarries required 240,000 tonnes of ENM to be imported onto the site. “We question why there is no traffi c management plan, no noise report and no air quality report,” she said. The sand mine, which is now known at Rindean Quarries, has not operated since 2004, based on Central Coast Council documents. Gosford Councillors voted against the quarry when DA42409 was considered in 2012.

The matter went to a Land and Environment Court mediation in 2014, and a Section 34 agreement was entered into between the quarry and Gosford Council to allow the extraction of up to 150,000 tonnes per year of washed, and dry screened unwashed, sand in fi ve stages over 20 years. The 20 years was to start from the date extraction physically commenced, and the quarry operator was also required to provide a $240,000 bond in the form of a bank guarantee, indexed by CPI, from the date of commencement to the closure of the quarry as insurance.

The NSW EPA defi nes Virgin Excavated Natural Material, in accordance with the Protection of the Environment Operations Act 1997 (POEO Act), as: natural material such as clay, gravel, sand, soil or rock fi nes that has been excavated or quarried from areas that are not contaminated with manufactured chemicals, or with process residues, as a result of industrial, commercial, mining or agricultural activities, and that does not contain any sulfidic ores or soils or any other waste, and includes excavated natural material that meet such criteria for virgin excavated natural material as may be approved for the time being, pursuant to an EPA Gazettal notice.

“Virgin excavated natural material (VENM) is a waste that has been pre-classified as general solid waste (nonputrescible).” The EPA defines ENM as: “naturally occurring rock and soil, including but not limited to materials such as sandstone, shale, clay and soil, that has: been excavated from the ground, and contains at least 98 per cent (by weight) natural material, and does not meet the definition of Virgin Excavated Natural Material in the Act.

“Excavated natural material does not include material located in a hotspot that has been processed, or that contains asbestos, Acid Sulfate Soils (ASS), Potential Acid Sulfate soils (PASS) or sulfidic ores.” Rindean Quarries Director, Mr Laurie Spiteri, said he would not answer questions in relation to the plans for the Somersby operation. “At the end of the day, we’ve got approvals to do a quarry there; we have spoken with the EPA, we have spoken with the residents and the Council, and at the end of the day, we have got the licence to quarry there,” Mr Spiteri said.

The consent authority for the Section 96 application is the Central Coast Council, but it is a designated development that requires approval from the EPA. Central Coast Council Administrator, Mr Ian Reynolds, said the Section 96 application would be “assessed on its merits”. He said the section 96 did not seek approval to alter the approved use of the property from the consent given for the 150,000 tonne per year to be quarried over 20 years.

“The approved use does require an Environment Protection Licence under the act, so the matter has been referred to EPA for review and that is where we sit at the moment,” Mr Reynolds said. “Council has asked for further information from the applicant and we are looking to the EPA for their review,” he said.

A letter from Down to Earth Geotechnical and Environmental Pty Ltd to the Central Coast Council said: “Fill material required for surface preparation will, as far as possible, be acquired from on site. “However, at present, stockpiles and overburden material is estimated to be approximately 10,000 cubic metres only. “The quantity of overburden and coarse reject material available immediately will not be suffi cient for the initial earthworks phase, therefore expediting construction of establishment works will not be possible, as the balance of material required for initial earthworks (approximately 140,000 cubic metres) will need to be sourced from an external location,” the letter said.

The letter stated that the 2014 Land and Environment Court orders did not “mention the type and quality of material required for importation to complete earthworks”. According to the letter, the Central Coast Council recommended that Virgin Excavated Natural Material (VENM) be imported, however, Down to Earth suggested it was diffi cult to source, subject to visual inspection only, and not specifi ed in the Land and Environment Court documents.

The Down to Earth letter said importing ENM would ensure “all fi ll material imported into the site will be tested at a NATA approved laboratory for chemical and physical properties to confi rm that it is, in fact, clean spoil. “By importing ENM, greater opportunities for sourcing suitable fi ll material can be afforded, which in turn will allow establishment works to be completed quickly with reduced disturbance to neighbouring properties.” Submissions close on Monday, December 5.