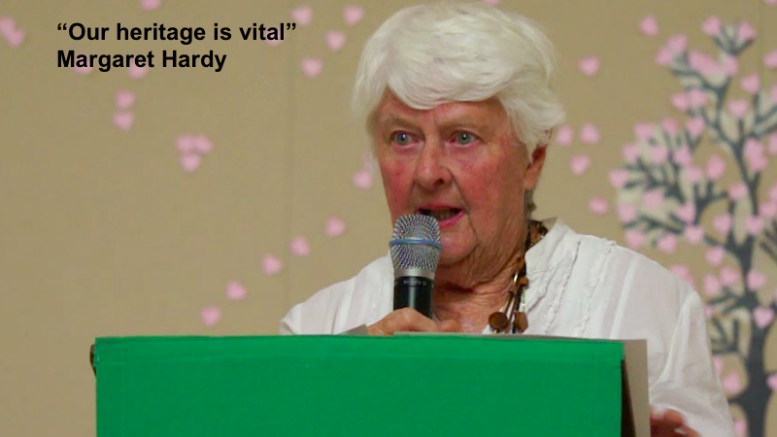 Ms Margaret Hardy, a long-term patron of, and activist for, the arts community on the Central Coast, outlined the history and importance of art within the local community at a public meeting on Wednesday, October 19.

“It has been the community who has pushed and worked for venues,” she said outlining the longterm campaigns behind the creation of the Central Coast Conservatorium, the Laycock Street Theatre and the Regional Gallery at Caroline Bay. Ms Hardy told the audience why it was important to have good facilities on a good site with architecture that meets society needs and fits with the environment and zoning. She said she believed the former Gosford Public School site ticked all the boxes including appropriate zoning.

“For music you need space with good acoustics, suited to all sorts of music and accessible to all local and visiting musical groups. “Some people advise we need 1,000 seats plus a 500 seat space, but also needed are green rooms, dressing rooms, a good, large foyer space, meeting rooms and possible space for storage, bus drop offs and access to parking,” she said. “Architecture is a wonderful art form in its own right and has the ability to encourage people to visit from far and wide to access good music, with space inside and outside for families to enjoy.

“It has been proved at Caroline Bay where the Regional Art Gallery and Edogowa Garden welcomes people from many parts of Sydney who tell you it is their favourite gallery and garden. “They enjoy the open space provided by the garden and parklands and use the café as a meeting place. “The children’s playground is a credit to council’s playground committee as it always has kids and parents enjoying this space. “It is well designed and a pleasure for all. “This precinct enables you to leave the mad world for a short time to enjoy peace and beauty in a relaxed community environment. “Since the gallery was built, the East Gosford shopping centre has improved, with good shops and good coffee. “The arts have been used all over the world for promotion of tourism and to encourage business planners to bring cities and towns alive.

“If you travel anywhere in the world, no matter if it is Europe, Asia, South East Asia, the Americas, Pacifi c Islands, islands everywhere, you will fi nd galleries, murals, museums and exhibitions showing creative visual arts, glorious music or performances, some telling the story of the place where they are situated. “Some have beautiful architecture, some are built in the local style using local materials, but they all represent the cultural heritage of that place and show us the pride that place has in cultural heritage in giving us a sense of place,” Ms Hardy said. “In the old days we had school of arts buildings, including the building on the corner of Mann St and Georgiana Tce, where many functions were held,” Ms Hardy said. “What exists now is at least half the size of the original building, but the original footings are now being investigated for archaeological information, as the NSW Government sold this block to Doma to build a tax offi ce,” she said.

According to Ms Hardy, the Gosford Musical Society had shows at Gosford Showground’s Dwyer Pavilion for many years. The Art Society started in 1971 and enjoyed the use of Kincumber School of Arts from about the 1980s to 2000, on a 20 year lease, for donating money to fi x the hall. “There were several art groups, such as the mixed media group, who held exhibitions around town. “Other artists, such as Ms Joan Matthews, had galleries and the Potters Society had exhibitions at Terrigal, and then built the workshops in Russell Drysdale St, East Gosford. “We had a very successful arts council in the 1990s which held wonderful outdoor concerts …with visiting performers such as James Morrison and even opera.” Changes to public liability insurance in the early 2000s made it diffi cult for community groups to run outdoor events.

Ms Hardy said the battle for better and bigger facilities started in the early 1980s as the bi-centenary approached. “People in the arts started thinking about grants and fund raising to build a theatre, an art gallery and the use of the old court house in Gosford. “The people behind Laycock Street Theatre worked hard for Gosford Musical Society (GMS), people like Don Craig, Kevin Booth and Hans Drielsma. “They applied for and received funding from the government, but also did a lot of fund raising and received donations to make Laycock Street a successful reality. “Despite the problems of being built between a sewerage works and a specialty-built fi re station, it has continued to provide a home for GMS with many other touring shows visiting. “It is owned by Central Coast Council as is the Peninsula Theatre, lobbied for by Woy Woy Little Theatre.”

Ms Hardy said individuals within the Gosford arts community negotiated with the NSW Government to get funding to lease the old court house for a Conservatorium without council involvement. “I don’t know who got the biggest shock when the news was announced, Council or other groups working for facilities. “It is now leased from Newcastle University and has many students of all ages; we need the Conservatorium to be part of the performing arts precinct,” she said. “Caroline Bay at East Gosford had been zoned in the 1970s for a cultural precinct on what is now Elizabeth Ross Park, but due to the people who lived next door, who didn’t want it built there, they lobbied and gained the support of local MPs. “Of course they made a big fuss, but were listened to. “We agreed it would be better to move next door to the disused old sewerage pit at 36 Webb St.

“At that time, we had a cultural advisory committee which enabled us to make sure it was put on the agenda, and were able to lobby the mayor and councillors to agree to build an arts centre on this land. “The Mayor at this time was Dr Patricia Harrison, who was negotiating with Price Waterhouse to sell this land for a canal development with 31 million dollar houses on it. “It was fortunate for our aims that the developer’s environment study supported our environment policy and agreed Caroline Bay was a shallow bay with fi sh breeding weed which didn’t allow for what they were planning.

“We got our arts space, so it is important to do your history studies.” The Multi Arts confederation was set up in 1983 with representatives from 35 groups and many individuals. “In 1988 Gosford and Edogawa had signed a sister city agreement. “Mayor Nakazato liked Mayor Harrison and offered her a Japanese Garden which gave the arts community an opportunity to encourage the garden to be located at Caroline Bay to advance the idea of building an art gallery which blended into the environment, and was a living space with world class gardens and parklands.

“We didn’t get exactly what we wanted, which including a tiered space for lectures, fi lms, etc., but at least we saved the land thanks to the generosity of Edogawa City office who paid for the garden and also shared the cost of stage 1, as the toilets and coffee shop were shared. “Where are all the thousands planned to live in Gosford going to go for entertainment? “Why should we lose our beautiful waterfront views for inappropriate offi ce buildings?” She urged those present to join the Gosford Waterfront Alliance and continue the push for the activation of an arts and recreation precinct on the city’s waterfront.