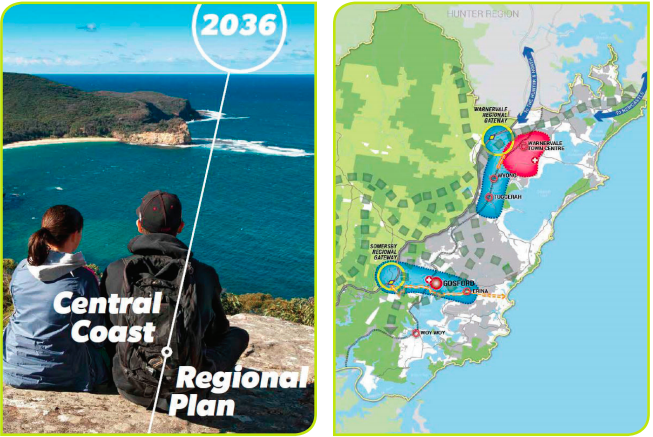 The Central Coast in 2036 will be a thriving regional economy with well-connected communities, jobs close to where people live and a healthy natural environment, according to the region’s Parliamentary Secretary, Mr Scot MacDonald, who launched the Central Coast Regional Plan 2036 on Friday, October 14.

According to Mr MacDonald, the plan sets out a new vision that will see Gosford and the wider region grow with improved professional, government and health services, better transport and public open space. This will be underpinned by the hundreds of millions of dollars the NSW Government is investing in the Central Coast, including $550 million for Gosford and Wyong hospitals, funding for schools such as $9 million for works at Point Clare Public School and more than $600 million for road improvements, Mr MacDonald said. NSW Planning Minister, Mr Rob Stokes, said the regional plan sets out the blueprint for a vibrant, sustainable and productive regional community over the next 20 years.

“This plan sets out the vision for the Central Coast to ensure this wonderful region grows and fl ourishes into the future with more jobs close to home, better transport, improved public facilities and high quality greenspace areas,” Mr Stokes said. “With our huge investment in infrastructure and services, we want to make people’s lives better as this region grows and changes.” Parliamentary Secretary for the Central Coast Mr Scot MacDonald and Member for Terrigal Adam Crouch welcomed the new vision for the region. “I’m pleased the NSW Government has delivered this important blueprint for the Central Coast to ensure the environmental values are protected and the local community and its economy grow sustainably,” Mr MacDonald said. The new Central Coast Regional Plan will help the community grow and thrive, according to the Member for Terrigal, Mr Adam Crouch. Mr Crouch said: “We now have one Council, one region and one plan to take us confi dently into the future,” he said.

Mr Stokes said the regional plan set out the blueprint for a vibrant, sustainable and productive regional community over the next 20 years. “With our huge investment in infrastructure and services, we want to make people’s lives better as this region grows and changes,” he said. Central Coast Council has welcomed the release of the State Government’s Regional Plan for the Central Coast. “The plan is designed as a ‘blueprint’ for growing the regional economy, accelerating housing supply and protecting and enhancing the natural environment over the next 20 years,” according to Central Coast Council Administrator, Mr Ian Reynolds. Population growth fi gures for the Central Coast were revised in September and are now projected to increase to 415,000 by 2036, bigger than the population of Canberra today.

Mr Reynolds said he hoped the plan provided the right toolset to meet the needs of what is now a much faster-growing community. “We submitted our strong views on the Draft Plan and, like others on the Coast, are looking forward to seeing how our feedback has been adopted in the fi nal plan,” he said. “Our community values our natural environment, amenities, relaxed lifestyle and sense of community and we want to sustain and enhance that. “We need to accommodate a lot more people here over the next 20 years and the only way we can do that is by creating more housing options, more local jobs and more infrastructure so our growing community can continue to live and thrive here.

“We have done a lot of work already to identify the key areas and projects we need to drive investment and jobs growth in our region. “Council looks forward to working constructively with the State Government to deliver the best possible outcomes for our community.” Under the Plan, a Central Coast Delivery, Co-ordination and Monitoring Committee has been established to be accountable for achieving the Plan’s vision and goals, with representatives from Council and State Government agencies. “As the only region in the State that has one Council, we welcome our seat at the table to help ensure we move the Central Coast forward,” Mr Reynolds said.

“Delivering a sustainable future for the Central Coast will require ongoing adequate funding of projects by the State and Federal Governments as well as Council.” Mr Craig Jennion, Executive Director of the Housing Industry Association of Australia for the Hunter said the HIA had hoped the Central Coast Regional Plan could assist with ensuring the provision of affordable housing for families by bringing more land to market and reducing the red tape and regulatory hurdles that hamper the delivery of new housing. “Whilst there are hints of this in the plan, there are also some initiatives that have the potential to do the very opposite,” Mr Jennion said. “Iit is pleasing to see that there is recognition in the plan of the need to address housing demand in both greenfi eld and infi eld locations,” he said.