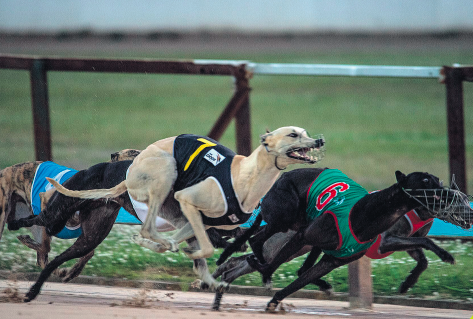 Mr Baird’s move, made just 13 weeks after his initial announcement to outlaw the sport, has been received with mixed reactions, applauded by the industry but condemned by animal rights advocates. Kevin Gordon from the NSW Greyhound Racing Industry Alliance said: “We are excited that the premier announced that he made a mistake, he listened to the truth, we have been speaking the truth for the last 13 weeks. “We believe that we now need to repay that lifeline that he has given us.”

At the Gosford Greyhound race meeting on the same day as Mr Baird’s announcement, there was elation about the decision. Matt Flint, 39, from Fairfi eld, and owner of threeyear-old Fab Surfy, said: “It’s good news, a boost for everyone with greyhounds. “We have a bit of a future now.” Dean Hansen, 42, from Tenambit, who has been involved in the industry for only 12 months, said: “It’s been a bit downhill but good news today.” Breeders and trainers said they retained concerns about speculation surrounding breeding limits and an ongoing air of uncertainty.

Carole Eaton from Jilliby, owner of Queen Albury, a three-year-old dog, said: “It is a beautiful family sport. “My mother had greyhounds and my kids want to get involved as well. “Track closures will limit the number of races available.” Shooters Fishers and Farmers Party MP, Mr Robert Borsak, said on October 11: “We caught the National Party with their pants down in Upper House Question Time today when they failed to rule-out greyhound track closures in or adjacent to the electorate of Orange.” The Gosford track employs 30 people according to Rachael Harrington, Gosford Greyhound Racing’s Operations Manager. Ms Harrington said she had been involved in the industry for 21 years and had been saddened by the bad press of late that had undermined some of the good work being done. “We held a Pink Ribbon benefi t here and nobody wanted to know us” she said. The event raised $5000.00 for breast cancer.”

The Liberal Member for Terrigal, Mr Adam Crouch, who had supported Mr Baird’s ban, said that the NSW Government would give in principle support for greyhound racing to have one fi nal chance in NSW, subject to the industry agreeing to the strictest regulations in the country to clamp down on animal cruelty. Mr Bairds’ political opponents have labelled the move as gutless. Dr Mehreen Faruqi, Greens MP and Animal welfare spokesperson, said Mr Baird was a “political coward”.

“We have seen a gutless Premier sign the death warrant on thousands of greyhounds today,” she said. People for the Ethical Treatment of Animals (PETA) spokesperson, Claire Fryer, said “Today is a sad day for the thousands of dogs who will now continue to suffer in this cruel and unjustifi able industry, but also for democracy.” Greyhound Breeders Owners and Training Association (GBOTA) Hunter Director, Mr Bradley Sabotic, said he was pleased with the result and fully supported reforms in the industry. “We have been reforming over the last two years and we want a regulatory framework that will push out the small percentage of those that don’t do the right thing.” he said.

A board will be set up, headed by former NSW Premier, Mr Morris Iemma, to map the direction of the industry in NSW.