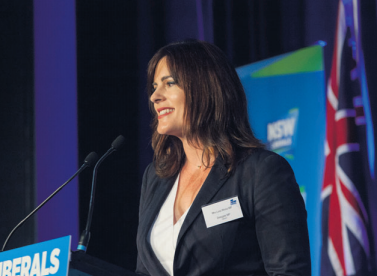 A speech in Federal Parliament about the future of Gosford and the need for local jobs has been used by the Member for Robertson, Ms Lucy Wicks, to respond to an Open Letter from Labor NSW Senator Deborah O’Neill.

Ms Wicks referred to the “bizarre Open Letter” published in local media by Sen O’Neill. According to Ms Wicks, the Senator’s letter highlighted Labor’s opposition to local jobs and growth, and raised important questions about why Labor said one thing about a Performing Arts Centre, then did another. “It’s a fact that the Central Coast needs a major injection of local jobs to be the thriving centre of opportunity that it deserves to be,” Ms Wicks said in her speech in the House of Representatives. “That’s why our community supported the Coalition’s Plan to deliver 600 new Federal jobs, mainly from the ATO, into Gosford, in two Federal elections.

“Over the last three years, I’ve held hundreds of listening posts, community meetings and roundtables regarding this desperate need for local jobs. “But let’s contrast this with Labor. “Just last week, Sen O’Neill sent an errorridden Open Letter through the media that was misleading and bizarre, and only highlights Labor’s opposition to local jobs and growth. “My commitment has always been about jobs, not about a building. “In deciding the location for 600 new jobs in Gosford, the ATO chose a site that’s a two minute walk to the centre of Gosford, selected independently by the ATO through an open, thorough tender process. “And that’s as it should be. “Sen O’Neill actually confi rmed this in a series of stunts in the Senate.

“Labor now wants to build the Performing Arts Centre on that land. “But why did Sen O’Neill spend three years as the Local Member publicly campaigning for it to be elsewhere? “And why doesn’t the Senator admit another simple fact, the location is actually up to the Council to decide? “Businesses describe this [the building of the ATO] as the ‘catalyst’ project our region needs.

“A catalyst that I will fight to see delivered, with 600 new jobs into Gosford by the end of next year. “The future of our region depends on it,” Ms Wicks said. The open letter from Sen Deborah O’Neill to Ms Wicks, expressed “the community’s frustration” with the Liberal Government’s plan to build an Australian Tax Offi ce on Gosford’s waterfront. Sen O’Neill said she had written the letter to call upon Ms Wicks to “work in partnership with the Central Coast community, Gosford Waterfront Alliance and State and Federal governments to locate a more appropriate site” in the centre of Gosford’s CBD. “This prime waterfront land is an inalienable public asset; it is an iconic site and we need an iconic development that meets the needs of our community” said Sen O’Neill.

“Labor believes the Coast deserves a cultural and recreational waterfront development that generates jobs, tourism and invests in our local economy. “We share the community’s call for the ATO building to be located in Gosford’s centre. “Let me be absolutely clear, I have never been opposed to any transfer of jobs to Gosford’s CBD proper. “Everybody agrees that we need more jobs for locals but our community does not want this development on this site.” Citing the GWA’s legal challenge against the development, Senator O’Neill said: “Since the Alliance’s decision has been made public you have been silent on this issue… I believe there is still time for you to listen to the community, Labor is listening and I ask you to do the same”. GWA Inc has enlisted the services of two barristers, who will work pro bono, to take a case to NSW Land and Environment Court to contest the Hunter and Central Coast Joint Regional Planning Panel’s June 30 consent to allow the project to proceed.