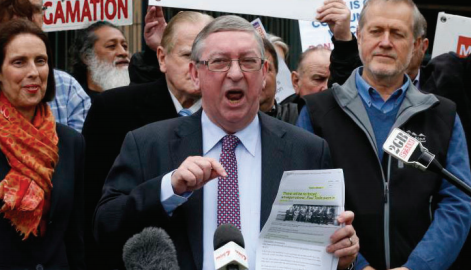 NSW Shadow Minister for Local Government, Mr Peter Primrose, said he will continue to campaign for the Central Coast to have an elected council earlier than September 2017.

“When the Premier fi rst announced the new forcibly merged councils, people asked, and it was widely reported, that elections would be held for new councillors in September 2016, at the same time as other councils, or no later than March 2017,” Mr Primrose said.

“Then in May 2016, they announced that elections for merged councils would be delayed until September 2017, and no one has been able to explain why,” he said. “I have asked the Treasurer in Estimates Hearings and he said the decision was made to delay the elections on the advice of the Electoral Commission. “I have asked the Electoral Commission, and they have said they take their advice on the timing of the election from the Government.”

Mr Primrose made a request under the Government Information Public Access Act (GIPA) for access to all documents relating to the timing of the election for merged councils and was told that it was not in the public interest to release that information. He said everything that is needed for an election is in place, including boundaries, wards and how many councillors need to be elected. “We know the Electoral Commission has the electoral rolls ready, and we know the polling booths are available, because they always use the same venues as those used for the Federal Election,” Mr Primrose said. “No one will explain why it is better to have an Administrator, an autocrat appointed by the Premier, to oversee the work that needs to be done to get the new councils up and running, than elected representatives from the local community.”

According to Mr Primrose, the split polling dates for merged and nonmerged councils caused mass confusion in the recent “half state’ local council elections. He said when the whole state voted in the 2012 local government elections, the total who did not vote was 540,000. That fi gure has already reached 400,000 from the 2.6 million people,eligible to vote in the recent local government elections. “The only agenda, which no one in the government will say, is that the NSW Government is committed to keeping its autocrats in their positions for as long as possible,” Mr Primrose said. Mr Primrose said the long period of administration facing councils like the Central Coast meant a lack of transparency that would not exist if elected councillors were put in place earlier.

“The best scrutiny is a council, that is why our society invented them – a group of people who are representatives, responsible to the people who put them there, not to the Premier,” he said. Mr Primrose said he has taken his refused GIPA application to the NSW Civil and Administrative Tribunal and has a date for a preliminary hearing in October. “I think we have to keep the pressure on to say the Government can’t be off the hook about delaying the elections. “The Premier is responsible to the Electoral Commission,” he said. Using the Central Coast Council as an example, Mr Primrose said the argument that an administration period was necessary to ensure the successful merger of the two “businesses” that were the former Gosford and Wyong Council did not hold.

He said the responsibility for merging the businesses into one organisation clearly resided with the CEO, Mr Rob Noble, not the Administrator, Mr Ian Reynolds. “It is the CEO or General Manager’s job to merge the councils and then implement the elected councils policies. “Are you seriously saying it is better to have a secret autocrat, a dictator that the CEO answers to during this period, than to have elected community representatives overseeing the process? “This government knows better. “Currently the CEO is not reporting to people elected by the community of the Central Coast,” he said.