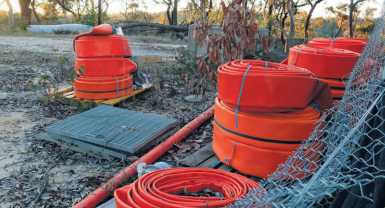 Coiled hoses inside the landfill site near the alleged discharge point

Mountain Districts Association spokesperson, Dr Stephen Goodwin, said: “After 12 months of dithering, and on the anniversary of the time limit for prosecution, the EPA announced it had dropped its criminal investigation. “We have been told that it was due to the lack of an eye witness to the event that finally forced the legal advisers to the EPA to recommend against a prosecution,” Dr Goodwin said. “Yet the environmental criminal standard for cases such as this is ‘beyond reasonable doubt’,” he said. “It does not require an eye witness to prove ‘beyond reasonable doubt, nor is it an imaginary or frivolous doubt.

“The EPA comes down hard on some individuals and companies, but appears to soft pedal on bigger fish. “There is a mounting suspicion that successful prosecution depends on the legal representation that the offending company is able to afford, and for those organisations, the evidence bar is set much higher. “It’s a common and depressing reality, and must be frustrating also for the EPA, but it means bad behaviour can continue unabated and justice is not being served.” Dr Goodwin said, “The Central Coast community knows that the highly visible plume of discoloured water photographed fl owing down Ourimbah Creek was traced back to the Mangrove Mountain Landfill by the former Wyong Shire Council’s Catchment Management Offi cer. “The EPA was presented with this evidence. “Mountain Districts Association members saw for themselves the broad band of sediment that had come from the landfi ll site and the resulting death of the native vegetation in the Jilliby Conservation Reserve caused by this sediment discharge.

“At the alleged point of escape from the landfi ll there is absolutely no way the discharge could have happened accidentally. “It would have had to have been deliberately discharged. “Mountain Districts Association believes that it was pumped out over the ridge and into a part of the catchment not normally associated with the Landfi ll site. “Unfortunately for the perpetrators, it made its way into Hallards Creek which runs into Ourimbah Creek. “It is estimated to be in excess of 10km from the Landfi ll site to Ourimbah Creek where the discharge was seen by residents. “That would have had to have been a large dewatering exercise from the Landfi ll site for it to be so concentrated in a diluting creek system that far from the source. “Just as EPA staff are starting to regain community trust, their own organisation lets them down.

“We are all frustrated,” he said. A statement issued by the EPA to Coast Community News said: “The EPA has investigated reports of discoloured water/sediment in Wyong at Hallards Creek and Ourimbah Creek in July and August 2015. “After extensive investigations including onsite visits and independent hydrological advice, the EPA has been unable to determine the origin of the sediment or the responsible party, so is not able to pursue regulatory action. “The EPA issues fi nes or commences a prosecution when it has good evidence that a licence breach or pollution incident has occurred and where it can prove the responsible party against whom to take regulatory action.

“In this case, while discoloured water and sediment was observed in Hallards Creek, and then later in Ourimbah Creek, there was not enough evidence to determine the cause or the responsible party. “Without evidence pointing directly to a responsible party, any EPA regulatory action could fail, if challenged in Court, because of a lack of suffi cient evidence. “The EPA appreciates the information provided by members of the public in their initial reports to the Environment Line and encourages people to report all suspected pollution incidents as quickly as possible and with as much detail as possible to assist with investigations.”