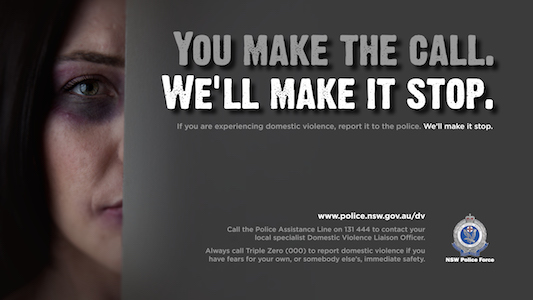 An image from the new anti-Domestic Violence campaign

A NSW Police Force campaign calling for further community support in bringing an end to domestic and family violence will now be shown across NSW clubs.

It’s not your fault is the theme of the campaign, which was launched in February this year, to raise public awareness by reminding people that there is no excuse for domestic and family violence and it is never the victim’s fault. The campaign includes a 30 second community service announcement (CSA), which has now been played across multiple television networks, as well as an extended video for cinemas and social media. Members of the NSW Police Domestic Violence Team used their own frontline experience investigating and prosecuting domestic violence cases to write, direct and produce the CSA.

ClubsNSW have now joined NSW Police in promoting the campaign across their state wide network by sharing the CSA, as well as launching digital and print media displays. Clubs promoting the campaign include Gosford RSL. NSW Police Corporate Sponsor for Domestic and Family Violence, Assistant Commissioner, Mr Mick Fuller, welcomed the support of ClubsNSW in sharing the CSA’s important messages.

“In NSW, police respond to more than 140,000 incidents of domestic and family violence per year. This translates to about 380 cases every day,” Assistant Commissioner Fuller said. “And now with the support of ClubsNSW, we have a powerful opportunity to connect with thousands more people and work toward shifting community attitudes,” Assistant Commissioner Fuller said. Deputy Premier and Minister for Police, Mr Troy Grant, said the NSW Liberals and Nationals Government is committed to breaking the cycle of domestic violence in NSW. “Domestic violence is unacceptable in our society and we are committed to driving down its prevalence,” Mr Grant said. ClubsNSW CEO, Mr Anthony Ball, said domestic and family violence had a devastating impact on society. “It is incumbent upon all of us to raise awareness and be part of the solution when it comes to ending domestic and family violence,” he said.

Focus on domestic violence not terrorism