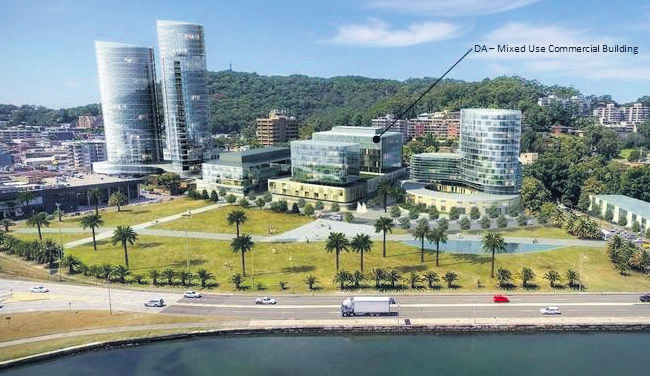 The NSW minister for finance, services and property, Mr Dominic Perrottet has initiated the latest flurry of debate about the regional performing arts centre and the former Gosford Public School land by announcing that a second office building was to be developed on that land.

Mr Perrottet said the NSW Government would deliver on an election pledge to relocate more than 300 public service roles to Gosford, with Government Property NSW submitting a Development Application (DA) to Gosford Council for a proposed mixed-use commercial building to be located at 20 Mann St, Gosford. The 300 public servant jobs from the Department of Finance, Services and Innovation (DFSI), would be housed in the mixed-use building and Mr Perrottet said another 130 jobs would be created during the design, planning and construction phases, with an additional 330 ongoing indirect jobs being generated on top of the 300 permanent jobs announced by Mr Perrottet.

The DA, submitted on Monday April 18, included the new six-storey, 7,000 square metre mixed use building, with an active street front and ground fl oor alfresco dining. Mr Perrottet said the DA was the fi rst part of a broader plan that would seek to open the Mann St site to a mix of uses accessible by locals and tourists, including dining, residential, retail, accommodation, parking and public open spaces. Mr Perrottet said the DA lodgement would give Gosford locals an opportunity for a closer look at the fi rst step in the government’s plan for the site. “With the DA lodgement, we are starting a process that will give the local economy a real boost and deliver hundreds of jobs to the Gosford CBD,” he said. According to Mr Perrottet, the announcement would help to energise the local economy, extend and revitalise the CBD, and increase opportunities to live and work on the Central Coast.

“The NSW Government is committed to the health and prosperity of the whole state, and today’s announcement is great news for Gosford and the Central Coast,” he said. “The infl ux of new public sector workers means millions in consumer spending on local businesses every year, which will be a fantastic economic injection for the local community. “Add to that the tens of millions in investment that development of the site will attract, and hundreds of new jobs in the construction phase and beyond, and you can see the fl ow-on effects of this relocation will be really signifi cant for Gosford and the Coast.” The DFSI building will include some street-level retail and al-fresco dining as part of a broader plan for the sale and redevelopment of the vacant 1.16 hectares making up the former school site, with proceeds from the sale to go to Restart NSW for reinvestment into new infrastructure.

According to Mr Perrottet, Government Property NSW is engaging in ongoing consultation with community groups and organisations. Information about the development will also be posted on the GPNSW website and the community will have the opportunity to comment on the proposal when it is placed on public exhibition by Gosford Council. The government will also hold a community dropin day, with details to be advertised in the local media and on GPNSW’s website closer to the date. The DA will be assessed against the normal planning criteria, just like any other development, with Gosford Council assessing the application and the Joint Regional Planning Panel (JRPP) being the responsible determining authority. The timeframe for assessment will depend on Gosford Council, though it is expected that the DA will be determined by the end of 2016.

An Expression of Interest (EOI) process for the government to secure a development partner is expected to be released in May. The EOI will seek a development partner for the mixed use building in the DA, together with the future development of the remaining 1.1 hectares. Construction of the new DFSI building is expected to be completed by mid-2018, with the relocation of DFSI staff to follow. The DA announcement coincided with the NSW Government committing to a further 10 year lease at 92- 100 Donnison St, Gosford, where over 620 staff from the State Insurance Regulatory Authority, Safe Work NSW, Insurance and Care NSW and Legal Aid NSW are located. “Prior to the last election, we said we were committed to improving employment opportunities here on the Central Coast, and today’s announcements show we mean business,” Mr Perrottet concluded.

The race to save the Gosford Waterfront precinct from ATO development