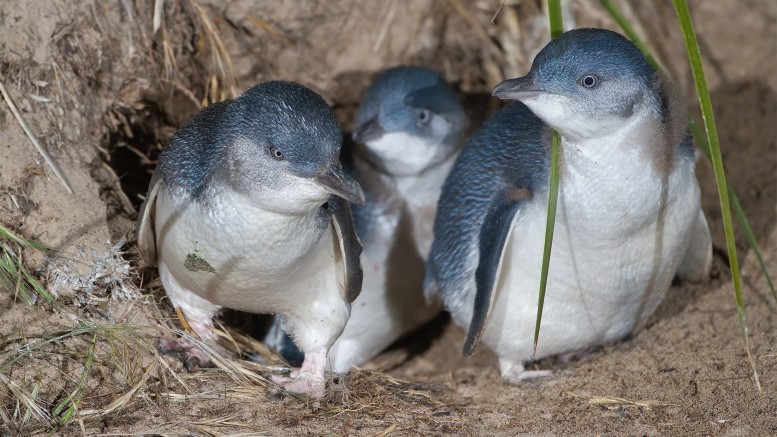 “Little Penguins are the only species of penguin to inhabit mainland Australia, however, due to disturbances such as human development and invasive species, most breeding colonies have been isolated to offshore islands, including Lion Island off Pearl Beach,” said Ms Kate Smellie, Central Coast Marine Discovery Centre (CCMDC) project officer.

“Little penguins are seabirds that have adapted their wings into flippers and they are effective swimmers, capable of spending long periods of time at sea,” Ms Smellie said.

“Little Penguins require burrows for breeding and this usually occurs in sand dunes or rocky areas.

“However, they may also nest in specially designed nesting boxes that have been used successfully in Little Penguin population recovery programs,” she said.

The main threats to Little Penguins include coastal human development, disturbance of nesting sites by humans, invasive plant species, or animals, including foxes, dogs and cats.

Nesting boxes used for the Little Penguin colony in Manly on Sydney’s Northern Beaches, have been successful in increasing suitable protected nesting areas and it has seen increases in the penguin population.

The Pearl Beach Men’s Shed have assisted in construction of nesting boxes for the Lion Island colony and it is hoped that this will aid in recovery of this population. Little Penguins are protected under the National Parks and Wildlife Act 1974.

“The CCMDC is pleased to have Sandra Vardeh, PhD (UNSW) as a guest speaker at this event. Sandra has been studying the population of Little Penguins on Lion Island since 2012 and will speak about penguin biology, her research and why the Lion Island colony has seen dramatic declines in numbers,” said Ms Smellie.

“Cathie Stubbs, Australian Seabird Rescue Central Coast Co-ordinator, rehabber and rescuer has many years’ experience working with injured seabirds and other wildlife and will be another speaker on the night.

“The Central Coast branch of Australian Seabird Rescue has aided close to 1,000 birds since it began in 2005 and Cathie receives and responds to calls coming in 24 hours a day.

“During the evening, Cathie will describe the threats to seabirds in our region, the difficulties of catching a spirited pelican, the processes of rehabilition, the joy of releasing healthy birds back to the wild, how the community can get involved and much more.”

Beast of the Bowl heat at Bato Yard