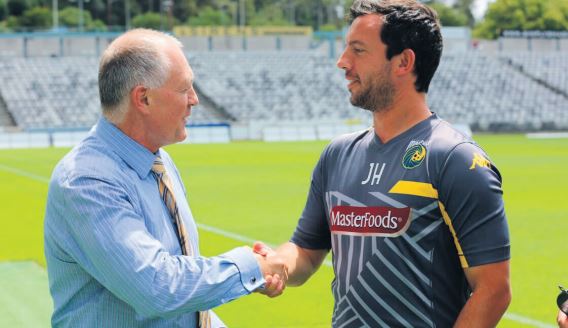 Central Coast Mariners’ club legend and assistant coach, John Hutchinson has become a life member of Men of Football (MoF), a not for profit organisation which seeks to assist football participants in times of need.

As a recently retired player, Mr Hutchison said he had watched former teammates and close friends experience hardship and understood how important it was to have a strong support base in times of need.

“The “Men of Football organisation deserves more credit than it gets. “For footballers that experience hardship, it’s an amazing cause.

“It’s something that people involved in the football family should all get behind because we help each other and we get behind each other,” Mr Hutchinson said.

“Even in my own situation, after you’ve played professional football for 19 years, you’re unsure of what’s next. “You know that Men of Football will always be there for you and to have that in the back of your mind is fantastic.”

Mr Harris welcomed Hutchinson with open arms and noted what a fantastic relationship the organisation has formed with Hutchinson and the Central Coast Mariners.

“For a new organisation that’s out there trying to look after the football family, having John Hutchinson on board is a real coup and we really appreciate the Central Coast Mariners featuring our Men of Football video at half time,” Mr Harris said.

“Having someone on board like John will make a real difference to what we do,” he said. The Mariners will also work alongside Hutch to assist MoF in fundraising and awareness initiatives as well as an “old boys” appreciation strategy that aims to recognise and highlight some of the former greats who have worn the Yellow and Navy.

As a main contributor to the Mariners’ strong culture over the past 10 Hyundai A-League seasons, Hutchinson speaks very highly of the players he has shared a dressing room with at the club.

“I think it’s important that the guys who have done so much for this club over the past 10 years are recognised and this relationship will help us bring club legends like Damien Brown, Mile Sterjovski, and Gumps (Andre Gumprecht) back into the fold, which is something that I’m excited about and the fans can be as well,” he said.

As a part of the strategy, The Mariners will host an official Old Boys day at its last Hyundai A-League home match of the season against the Newcastle Jets on Saturday, April 9, 2016, where a raft of former players will be officially recognised and celebrated at Central Coast Stadium.