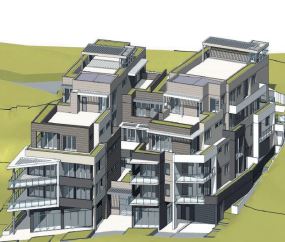 A decision on a development application for shop top housing at Cape Three Points Rd in Avoca Beach has again been deferred by Gosford Council.

At Gosford Council’s ordinary meeting on October 27, a speaker in favour of the development stated that there had already been two site inspections, and that the development plans had been altered to remove one rooftop terrace and reduce the size of another.

The speaker also argued that there was more parking available than legally required.

A speaker against the application, representing concerned residents, argued that it was too big, too bulky and too high and that there were unresolved traffic concerns.

Cr Gabby Bowles said that while she appreciated the residents’ concerns, given the proposed development was on the edge of two different zonings, she could not find reason to refuse the application and moved that it be accepted.

“My rationale for moving this motion is, in reviewing information that has been provided and considering conditions that have been attached, the primary concerns regarding traffic, parking, bulk and scale and amenities to neighbours, and the legalities of what is and is not allowed for the zoning of site, have been answered,” Cr Bowles said.

She said she believed council staff had included reasonable conditions to mitigate the impact of the development on residents. Cr Hilary Morris said she could not support the motion because she didn’t believe a proposal for 27 units was sympathetic to the surrounding neighbourhood.

“The problem with the development is that it doesn’t recognise that the road in front of the site doesn’t allow for parking on the street as it is too narrow.

“Most units will have more than one car, so at the very least, we will have 54 cars parked there and there seems to be no attempt to answer the problem that is going to be caused here.

Cr Doyle said there had been 55 public submissions and many emails relating to the development, however, he thought councillors were running out of reasons to refuse the development.

“I can find no reason not to support this, so it is my hope the owners do proceed, but when they do, that they are mindful of the concerns it has generated,” Cr Doyle said. Cr Bowles spoke against the refusal motion stating she wanted her serious concerns to go on the public record. “This is a contentious development and no one in the chamber has dismissed the community’s concerns, but many have been mitigated,” Cr Bowles said.

She said she was concerned about the potential financial position Council could be placed in if the developer challenged its refusal and the matter ended up in the Land and Environment Court.

In response to a question from Cr Bowles, Gosford Council’s CEO, Mr Paul Anderson said: “The recommendation from staff is that the development is compliant with planning schemes, so if the applicant was to challenge a refusal on the basis of compliance, the court would take public interest into account.”

Mr Anderson said the outcome of any challenge was likely to be that the Land and Environment Court would refer the issue to a Section 34 conference and require the parties to come to an agreement.

Cr Bowles then suggested the decision be deferred to address ongoing concerns about its impact on the surrounding community. Cr Scott spoke against Cr Bowle’s amendment: “I think there is something wrong with the planning scheme where the site doesn’t match the road it is in front of and the residents shouldn’t have to pay for that and the residents shouldn’t have to put up with that.

“The developer has the right to propose what he wants on the land but doesn’t have the right to make it uncomfortable for the residents.” The amendment was carried with Cr Scott and Morris voting against it.

Gosford, News, Out & About