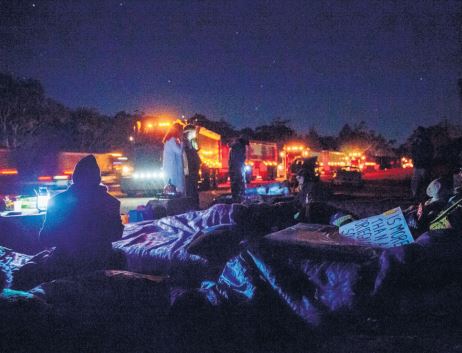 The Land and Environment Court has refused an application by Rocla Materials, now owned by Hanson, a subsidiary of the Heidelberg Cement Group, to expand its sand quarry at Calga.

Land and Environment Court Commissioners Dixon and Sullivan found against the proposed mining expansion on the basis of the heritage value of the site.

Tassin Barnard of the Australian Walkabout Wildlife Park, which was one of the applicants in the case against the Rocla quarry expansion, said: “All I can say is we won. “They just declined the quarry outright so we couldn’t get a better outcome,” Ms Barnard said.

“The area has such huge cultural significance for Aboriginal Australians and for all Australians, it is a hugely significant women’s site,” she said. According to Ms Barnard, Rocla had argued they could save a stone engraving but the Commissioners’ ruling showed their understanding that the whole site at Calga was of great cultural and heritage value.

“Even our supporters believed the system would not work with us, but it has,” Ms Barnard said.

Ms Tracey Howie, director of the Gur-ingai Tribal Link Aboriginal Corporation, said she was subjected to one and a half days of cross-examination by Rocla’s legal team during the Land and Environment Court hearing.

“One of the other lawyers objected to the forensic nature of the crossexamination from Rocla and reminded them that I, and other lay witnesses, were not on trial,” Ms Howie said.

“I felt like I had a thousand black fellas standing behind me in a spiritual sense,” she said. “I have no doubt that Commissioner Sullivan’s archaeological expertise would have been absolutely instrumental in the judgement,” she said. “The area itself is of great significance, particularly to Aboriginal women, it includes indicators which teach us about reproduction, for example,” she said. Mr Ian Sutton from Camp Quoll said the fight had been two years long, given that the NSW Planning and Assessment Commission gave Rocla the go-ahead for the southern expansion of the quarry on Christmas Eve 2013.

Camp Quoll was set up on New Year’s Eve 2013 with a promise not to disband until the Rocla proposal was withdrawn. “The Rocla application allowed for the expansion of the quarry which would have meant the removal of one million tonnes of sand per year.

“And it was our aquifer, the Mangrove Mountain aquifer, that they would have been removing the sand from,” he said. Mr Sutton said the fight against Rocla’s proposed southern expansion was just part of a campaign against the quarry that the community of Calga and Peats Ridge had been sustaining for over 10 years.

“Camp Quoll wants to thank Darkinjung, Guring-ai, the Walkabout Wildlife Park and the entire community for working together to achieve this result,” he said.