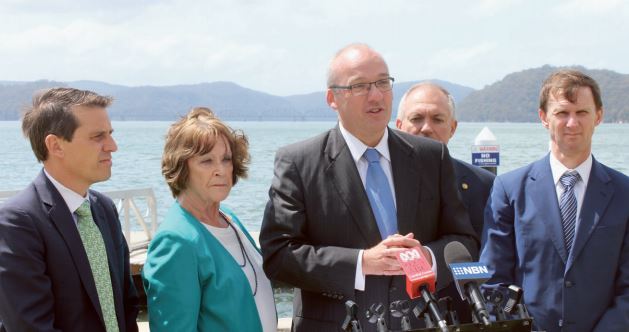 Member for Gosford Cathy Smith with leader of the opposition, Luke Foley and other NSW opposition politicians

Coast residents are still waiting on the Baird Government to tell them when it plans to investigate the crumbling Hawkesbury River Railway Bridge two weeks after reports of its deterioration.

In mid-September, the NSW opposition released documents showing the government was told about the dire state of the bridge, but the community is still waiting to receive any consultation and the bridge is still to be inspected.

Obtained under Freedom of Information, the documents showed the government was forewarned by engineering and development consultants in 2013 that vital repairs had to be undertaken to the bridge.

The report also recommended that in the event no remedial action was taken, regular underwater inspections should occur every six to 12 months.

The last underwater inspection report showed exposed steel reinforcements due to large amounts of concrete missing, with remaining concrete being soft and crumbly when touched.

Exposed steel reinforcements had also suffered significant corrosion. On September 14, NSW minister for transport and infrastructure, Mr Andrew Constance said it would be a matter of days before an underwater inspection took place.

“Since then, he has failed to communicate with the community about the status of the underwater inspection, instead opting to open up a tender for repair works,” said member for Gosford, Ms Cathy Smith.

Immediately before a press conference held near the Hawkesbury River Railway Bridge on Wednesday, September 30, the NSW Government locked an access road used by local children and fishermen “in an attempt to smother safety and structural concerns about the bridge,” Ms Smith said.

“The bridge remains a crucial piece of infrastructure connecting the Central Coast and Hunter to Sydney,” she said.

“Approximately 100 passenger trains use the rail line each day with more than 10,000 passengers counting on its reliability.

“The Government hasn’t even told the community when an inspection will take place, let alone the scope of works needed to fix it.

“Given the damning report from engineers, the Baird Government should be doing far more to work with the community to ensure they are safe and able to rely on the bridge.

“The Government needs to front up and communicate with the people of the Central Coast, not hide half baked promises to maybe, one day, possibly consider doing something.

“Like thousands of others, I travel across the Hawkesbury River Railway Bridge to travel to Sydney and assume that the necessary maintenance and safety measures have taken place, she said.