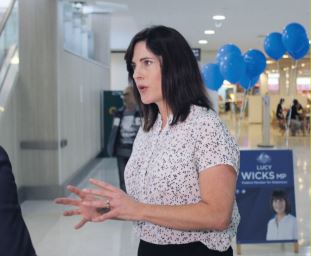 Delivering 600 jobs is only the first step in solving the puzzle of how to revitalise Gosford, according to member for Robertson, Ms Lucy Wicks MP.

“The NSW Government has advised that the [ATO] site is on a portion of the land of the old Gosford Public School site, not the entirety, and will be facing towards Georgiana Terrace and the city,” Ms Wicks said.

“The rest of the land is owned by the NSW Government and forms part of the wider waterfront precinct,” she said. Ms Wicks said she had met a range of community groups and businesses who have backed the Commonwealth Government plan for 600 jobs for Gosford.

“The exact mix of jobs is being determined, and economic modelling clearly shows it will create fl ow-on benefits of around 1,400 more jobs.

“The Gosford City Chamber of Commerce has described the announcement as a ‘great day for our city’. “The ATO ran a thorough open market approach for the development in line with Commonwealth Procurement Rules, with Doma Group selected as the successful applicant.”

Ms Wicks said the Gosford waterfront rally held on Saturday, October 3 was a political event, not a community event.

“Labor’s anti-jobs agenda on the Central Coast is reckless and will damage the Central Coast economy. “Labor had the chance to attract these additional jobs to Gosford during their time in office and failed to deliver.

“For them to now do everything they can to sabotage these efforts tells Central Coast residents everything they need to know about the sort of damage Labor would do to the area in government.”

Ms Wicks said she has met with the Friends of the Performing Arts Precinct (FOPAP) and the local Multi Arts Confederation.

“I’ve been a great supporter of a performing arts centre in Gosford, and have been fighting to secure funding for what would be a significant cultural and tourist hub.

“In May this year, Gosford Council agreed, seven votes to nil, to realign the boundaries of the old school site after a submission from CCRDC. “This decision was carried with the support of Labor and Independent councillors.

“I’ll be asking Gosford Council and the State Government what they intend to do with the rest of the waterfront area. Ms Wicks held a media conference on Saturday, October 3 in the Imperial Shopping Centre.