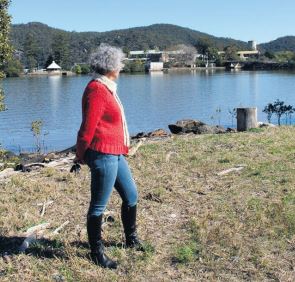 “The ultimate point of the visit was to keep Peat Island in people’s minds so they know it is something they could potentially lose,” Cr Morris said.

“We were initially given permission to get on the island, someone was going to meet us there, but at five minutes to 5:00pm the day before, our access was denied because the person they had organised couldn’t come,” she said.

On Tuesday, December 9, 2014, eight Gosford councillors voted in favour of a development proposal to rezone the land from its current special use zoning as a hospital to residential use. Cr Morris and Cr Vicky Scott voted against the rezoning.

According to Cr Morris, the proposal has been in the hands of the NSW Department of Planning and Environment ever since. She said there are significant issues that need to be resolved before the land is used for any development.

“The issues are that there are about 200-250 graves on Peat Island of deceased persons that were residents of the hospital. “I don’t know where they are located as I wasn’t able to get onto the Island on Friday,” she said.

“We didn’t get to do the site visit of the Island, we just got to walk on the grounds before the bridge and even then, someone pointed out an Aboriginal carving on the part marked as a public reserve.

“We also observed that the proposed marina to be built north of the Island is a mud flat,” she said. The NSW Department of Property and Finance is currently looking after Peat Island which is Crown Land because it is owned by the state.

According to Cr Morris, the current development proposal “tramples on” the community’s desire to protect the site’s heritage, river access and recreational value.

The proposal currently under consideration by NSW Planning and Environment includes rezoning 18 properties, on the foreshore of the Mooney Mooney side of the Hawkesbury River and on Peat Island, to permit a mix of residential, community, recreation and employment land uses.

“Protection of the local environment is vital and the retention of bushland is strongly supported, along with protection of mangroves and other natural features,” she said. She has questioned whether current sewage infrastructure could cope with the 450 additional residences included in the current development proposal.

Cr Morris said Peat Island is part of the gateway to the Central Coast and the visual impact of any development should be considered.

She said the identifiable needs of the existing community must also be addressed, including their need for small scale commercial and retail facilities, passive recreation and sporting facilities, community meeting places and local services.

“The local community highly values the heritage associated with the site,” Cr Morris said. “The river is important and needs to be protected.

“Public access to the waterfront for passive recreation is essential and tourism is generally a desirable use, particularly if it is in keeping with the unique environment and contributes to the recognition of local heritage.

“A marina that accommodates local river users is generally supported.” There may be potential capacity issues with local infrastructure including; access to the train station, power, sewerage and telecommunications.

“Noise from the F3 is also an existing issue. “It is clear from the earlier consultation that the community holds three things important. “They value highly the natural values of the land adjoining the river.

“The community wants there to be access to the waterfront for passive recreation and tourism is desired. “It is understood the planning proposal tramples on those desires,” she said.

Attack on Council was cynical