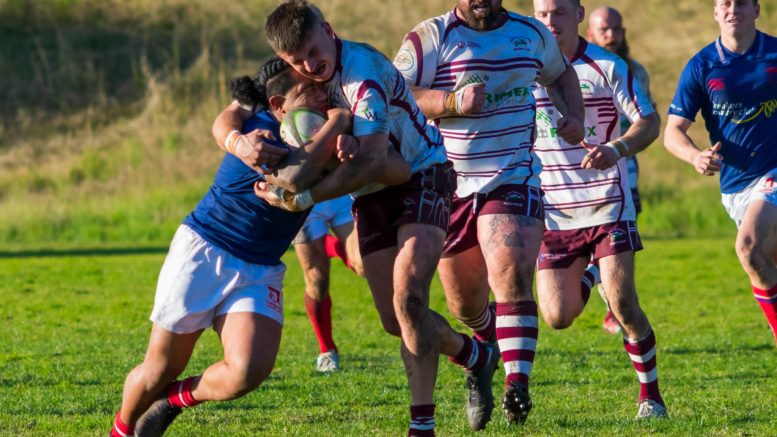 The Terrigal Trojans defeated the Kariong Wanderers by just one point, 20-19, in the Central Coast Rugby match of the day at Kariong Oval in a thriller from start to finish.

There was plenty of intense rugby in the first 20 minutes of the match with neither team able to hit the scoreboard.

It was Kariong who eventually opened the scoring with a converted try to lead by 7 points to nil.

However close to halftime, Terrigal was able to square the ledger and their converted try saw the scores locked at 7 points apiece at the break.

The Trojans came out strongly in the second half and soon crossed for their second converted try to lead by 14 points to 7.

But once again Kariong were quick to respond, posting their second try (14-12) in a tight battle for control, with Terrigal kicking a penalty goal to push the score out to 17-12 with 15 minutes left.

The Wanderers then seized the lead, 19-17 with their third try.

But with just seconds remaining, Terrigal five-eight Adam Danckert kicked a drop to snatch victory for the Trojans.

It was an exciting match to say the least.

Best players for Terrigal were five-eight Adam Danckert, No.8 Ethan McInnes and lock Macklan Collins, while for the Kariong side the best performers were halfback Jye Clack, flanker Josh Bottero and hooker Justin Walker.

Hornsby travelled to Woongarrah Oval to take on the Warnervale Wildcats.

The match saw some exciting, high-scoring rugby with Warnervale outlasting Hornsby to win the match by 42 points to 31.

Hornsby got away to a great start in the match crossed for two early tries but Warnervale slowly took control of the play and the scoreboard.

Hornsby were best served by winger James O’Connor, who crossed for 2 tries, and No.8 Talifolau Sitani.

The Lakes versus Gosford clash was played at Gosford Showground.

Being the first time Gosford had played at home this year, a large crowd was on hand to watch the contest.

In a cliff-hanger from start to finish, The Lakes got home right on fulltime to win 24 points to 23.

An upset result seemed very much on the cards, with Gosford playing some of their best rugby of the season.

But a late converted try to prop Tim Poese, crashing over for The Lakes allowed the visitors to snatch the win and stay in contention for the finals.

The Lakes had several good players but none were better than props Tim Poese and Connor Starkey, and halves Logan Hemopo and Brayden Hutchinson-Walters.

Terrigal will take on the Ourimbah Razorbacks at The Haven in what promises to be a mighty top-of-the-table clash between two fierce rivals who will both still have their eyes on the minor premiership.

The Lakes will take on Kariong at Slade Park in a battle to secure a top-four position, while Avoca beach will host Warnervale.