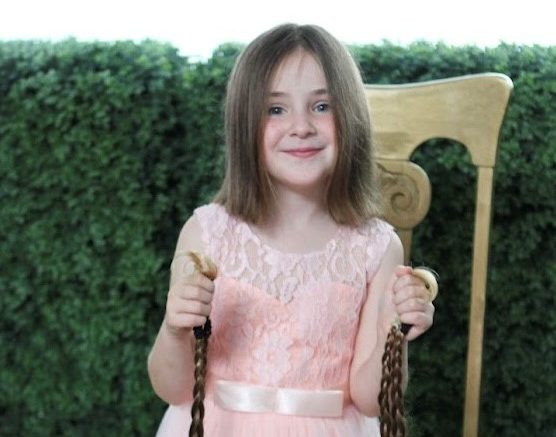 Five-year-old Liberty Greene is happy to be sporting a new hairdo after more than 30cm was cut off, and she’s raised about $3,700 for charity into the bargain.

Mum Katie said about 30 family, friends and school mates turned out to support Liberty for the big event at The Boathouse in Koolewong on Sunday, July 3.

“She loves her new bob hairstyle and swishes it around, and loves that it only takes a few brushes, and that it doesn’t get all tangled up in her clothes or when she sleeping,” she said.

“She’s always had long hair, with only a trim here and there, but it got so long and I just didn’t want it to go on the floor.

“I wanted it to go to a charity and it’s something we’d always spoken to Liberty about and she knew since she was about 3 that her hair was going to charity.”

Katie said her daughter was always keen to help her cousin in the UK, 11-year-old Ethan who was diagnosed with juvenile diabetes at 18 months old.

“She told me she wanted to give her hair to a girl that didn’t have any hair, but she kept saying she wanted to help Ethan first.

“So, the plaits of hair cut off have been donated to Hair with Heart to make wigs for children who have lost their hair due to illnesses.

“And the money raised has gone to the Juvenile Diabetes Research Foundation in support of her cousin Ethan.

“Liberty is happy that she’s helped Ethan and that the hair is going to another little girl, it’s not going to waste, and to a charity that’s close to our hearts,” Katie said.