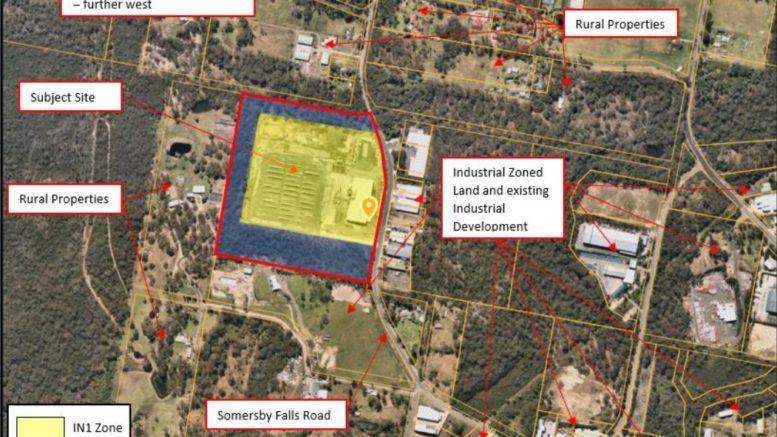 A map showing the location of the facility

The Central Coast Local Planning Panel has approved the extension of operations at a concrete manufacturing facility at Somersby despite a raft of objections to the proposal.

At its meeting on June 23, the panel gave permission for an extension of operating hours and a significant increase in production capacity.

The facility, at 149 Somersby Falls Rd, is operated by Reinforced Concrete Pipes Australia (RCPA), with the company applying for operational modifications to “accommodate a successful and growing business operation and to meet current market demand”.

The proponent applied for permission to import, place and compact fill (approx. 56,000m3) to a maximum height of approx. 8.4m in the central northern portion of the site to provide additional hard stand storage and construct fixed acoustic walls along the top northern edge of the proposed batter (filled area) and along the top western edge of the existing hardstand area.

“Internal noise walls are also proposed to the north and west of the existing batching plant,” the application said.

The application also called for the formalisation of a second vehicle entry point at the northern end of the property frontage to facilitate truck entry from Somersby Falls Rd and improved efficiency of vehicle movements within the site, with existing access at the southern end of the property frontage is to be retained as a combined entry/exit point for standard vehicles and exit only for trucks.

RCPA proposed a phased increase in production capacity over several years up to a maximum of 100,000 tonnes per annum and an extension of approved operation hours to 24 hours, seven days per week.

The proponent said the amendments would increase staffing from 35 full and part-time employees to 55 employees (split over day and night shifts).

After hearing from four speakers against Central Coast Council’s recommendation for approval and from three speakers on behalf of the applicant, the panel approved the application with some conditions.

Although 24 hour a day seven day a week operation was approved, the northern storage area of the site is not to be used between 10pm and 7am; likewise half of the western storage area.

Also prohibited during this time are loading cement from trucks into cement silos and sand, gravel and cement deliveries to the site.

The extended hours are permitted for a period of 24 months, with a further DA required to make them permanent.

The panel also made several stipulations as to acoustic walls on site.

More than a dozen submissions of objection were received to the proposal.

One submission said the DA marks a “fundamental change to the scope design and impact of a heavy industrial business that was never suitable in this highly sensitive residential area”.

“Since its approval the initial DA has undergone several amendments to the point where today residents are subjected to the noise from 5am until 10pm when they are trying to sleep,” it said.

One submission said no part of the traffic assessment has considered the impact on residential roads and another said an acoustic wall proposed will do nothing to stop the impact of noise or dust which rises high in the air.

“There is no town water in Somersby so concrete and sand dust can travel onto the roofs of properties and then into the drinking supply.,” it said.

Another submission complained of “constant vibrations” as pipes are loaded by forklift onto trucks and stacked in the yard from early morning to late at night.

Concerns regarding heavy truck traffic and parking on nearby residential roads was also raised.