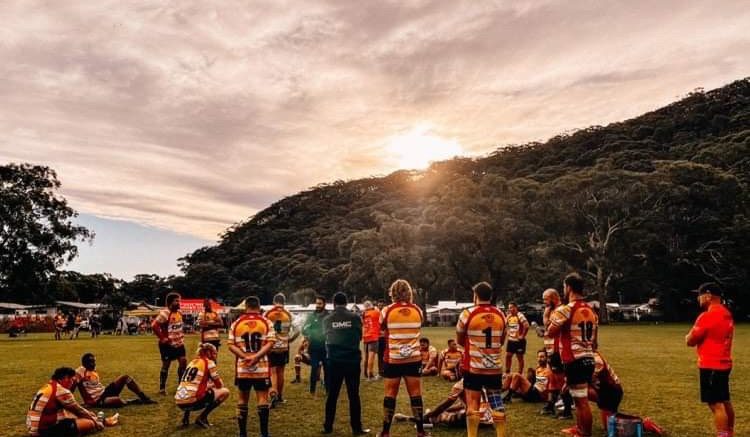 The Lakes sits on top of the table, along with Avoca Beach

Round 4 of the 2022 Central Coast Rugby Union competition on April 30 saw wins for Avoca Beach over Ourimbah, The Lakes over Woy Woy, Kariong over Hornsby and Terrigal over Gosford.

Despite some upheavals with venues because of the continuing damp conditions, all matches made it onto the paddock.

In the match of the day, Avoca Beach hung on to defeat the Razorbacks 24-19 in a tight encounter at Woongarrah No.2 Oval – transferred north because Ourimbah Rugby Park was unavailable.

Avoca Beach led for the entire 80 minutes but the Razorbacks were always just behind.

Avoca Beach opened the scoring with a converted try then followed up with a penalty goal to take an early 10-0 lead.

The Razorbacks responded before half-time with their own converted try, with Avoca Beach going to the break leading 10-7.

Both teams scored two tries apiece in the second stanza to keep the scores tight.

The Razorbacks were best served by winger Ryan Bender, who crossed for two tries, lock James Mann and No.8 Rob Peden.

Kariong got away to a great start at home to Hornsby at Kariong Oval and maintained that momentum for the entire match, scoring a 54-10 win.

By half-time they had jumped to a handy 26-5 lead and posted a further 28 points in the second half.

A feature of the match was the six tries by Sean Peruch.

Hornsby scored a try in each half thanks to winger James O’Connor, while centres Brad Dixon and Harry Fox and prop Jack Vandersteen never stopped trying.

Ettalong Oval saw a one-sided battle in which The Lakes recorded a 51-5 victory over Woy Woy.

The match was moved from Woy Woy Oval due to drainage issues.

The Lakes took control early and never looked back, going to half-time leading 26-0, and posted a further 25 points in the final 40 minutes.

Woy Woy gave it their all but simply found the visitors too strong on the day.

Terrigal opened up their season by defeating Gosford 93-0 at The Haven. Terrigal dominated the match, leading 60-0 at halftime. Gosford never stopped trying and reduced the scoring flow in the second half.

The Premier 1 points table sees The Lakes and Avoca Beach on 8, Terrigal, Warnervale and Hornsby on 5, Ourimbah on 4, with Gosford and Woy Woy yet to score.

On Friday night, April 29, The Bay won their first President’s Cup game this season when they defeated Warnervale by a pleasing 15-5.

Warnervale opened up the scoring with the first try, but The Bay finished stronger, responding with three tries.