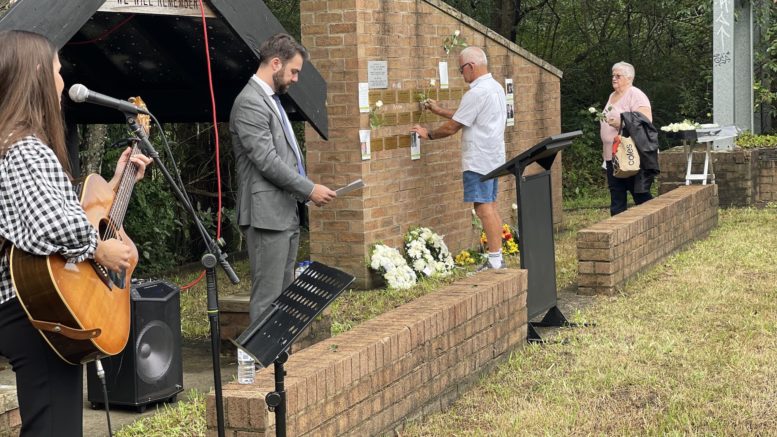 Speaker, musician and mourners at the deceased workers memorial at Ourimbah

The annual Central Coast service to commemorate International Workers Memorial Day held on 28 April each year (also referred to as International Day of Mourning) was held at the Ourimbah Memorial Wall of Remembrance on Thursday, April 28.

The Service was well attended by family and friends who have lost loved ones because of workplace death or occupational illnesses at work.

Representatives from all levels of government attended, along with SafeWork NSW, the Asbestos Diseases Foundation of Australia and Lisarow High School.

The Ourimbah Memorial Wall of Remembrance was officially opened in 2006 to give Central Coast residents a place to remember loved ones and as a reminder that we must continue to work towards making workplaces safe environments.

Ms Stokes, a Central Coast local resident, spoke of her husband, Edward, who tragically passed away in 2003 from mesothelioma due to asbestos exposure during his time working as a panel beater.

“The rallying cry of Workers Memorial Day is to remember the dead and fight for the living. I am always pleased to host this event in my electorate as a service to the whole Central Coast community.” David Mehan said.

According to data from WorkSafe Australia, as of April 21, 2022, 52 Australian workers have been accidentally killed at work so far this year. At the same time last year, it was 44.