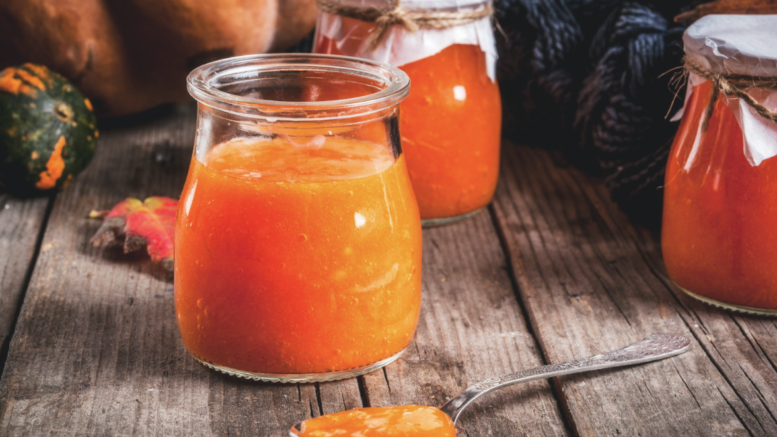 Well it’s ‘that’ time of year again, for anyone with a sizeable garden – the zucchini glut has finally been dealt with and depending on the precise timing of your compost heap reinventing itself as a pumpkin patch, we’re likely very close to that annual onslaught of pumpkins.

For everyone else, it’s just a great time of year to eat pumpkins.

And you get to do so free from the niggling dread that is par for the course as the owner of a rampant, unchecked pumpkin vine.

Squash or pumpkin – what’s the difference?

Now, given that there’s a pumpkin jam recipe on the horizon, there’s no way around dipping into the squash vs pumpkin debate.

Having spent some time living in America, the continent where pumpkins first originated, it’s obvious that our Australian definition doesn’t quite align with theirs. We tend to use pumpkin as more of an umbrella term for a broader range of squash.

For instance, when I was doing my culinary training in New York and would refer to ‘butternut pumpkin’, I would be promptly corrected that it is in fact, butternut squash. It took me a little while to integrate the local dialect and discern between pumpkins and squash.

Back here in Australia, I’m now in that confused middle ground where I use both terms interchangeably and likely alienate even more people than when I was abroad.

The fact is, all pumpkin and squash varieties are technically squash from a botanical perspective. There isn’t actually a single botanical distinction that separates the two, although the Americans would tell you that a pumpkin is round, with a much harder stem and skin and usually a lower water content than squash.

Some suggest pumpkins have a higher protein content as well, although from my research it depends on the type of pumpkin.

Going off their definition, jam can only be made with the sweet, dense (lower water content) varieties – the ones they’d normally use for pumpkin pie. In New York they referred to them as sugar pumpkins. They would never recommend making it with squash.

However, I’ve made it several times with butternut pumpkin and it is perfect for the job. Sweet and fruity and let’s face it – a much easier option to peel and prep!

The jam recipe is coming, but the nutritionist in me can’t skip over the impressive nutritional profile of pumpkin.

Could the humble pumpkin be a superfood?

Pumpkins have important prebiotics, peptides and other powerful compounds that make it a rising star in the literature when it comes to diabetes, gut disorders and other inflammatory conditions.

It is now considered in the literature to be a functional food, which is a more credible and less glitzy way of calling it a superfood.

Pumpkin, folks. Can you believe it?!

If anyone you know is spending a fortune on superfood powders from the Amazon, please tell them that seasonal, locally-grown organic produce will give them far more bang for their buck! The only thing it lacks is packaging – a canvas for all those dazzling marketing claims. But the benefits are indeed on par and we now have the science to back it up.

Pumpkin is predominantly complex carbohydrate. It is a fantastic source of carotenoids, which are powerful antioxidants. The main carotenoid is beta-carotene, but they also contain lutein, lycopene, alpha-carotene and cis-beta-carotene. Depending on the health of the soil that it was grown in, pumpkin is also an abundant source of minerals like potassium, calcium and magnesium.

Pumpkin extracts (of the fruit and the seeds) have been shown to be powerfully antibacterial, antifungal and anti-parasitic. The seeds can be effectively used to combat fungal infections and even to use in combination with current antifungal agents, both to improve its effectiveness and even to reduce its side effects.

We tend think of pumpkins as a vegetable, but from a botanical perspective, it is actually a fruit. Health conscious types who are still trapped in the reductionist model of viewing their food might further reduce it to ‘carbs’ – and potentially avoid it for that reason.

However, pumpkins are so much more than a deliciously sweet carbohydrate! They’re an incredibly rich source of pectin, which is a gut-healing prebiotic. Prebiotics are the primary food source of our beneficial gut bacteria (the status of which, are probably the biggest determining factor of our overall health).

And pumpkins don’t contain any old pectin, but a superior type of pectin, which has impressive implications on several fronts.

Pectin-rich foods play a critical role when making jams. This is why apples and citrus are often used in the process of jam-making, as they are also very high in this special type of gut-loving fibre.

Pumpkin contains a type of pectin that forms a gel-like structure more easily than other types of fruit, which means that only a small concentration is required to make a gel set. Hence why it’s such a great choice for jam.

2. From a nutritional perspective:

When comparing citrus, apple and pumpkin pectin samples in (in vitro) studies of human colon cancer cells, pumpkin offered the most protective effect against oxidative stress and cytotoxicity.

This is pretty big news. Not only for the health conscious among us, but for the gardeners and preservers, too!

A pumpkin a day keeps the doctor away

Some researchers have gone as far as recommending pumpkin for daily consumption! To me that smacks of the typical Western mindset – if a little is good, more is better – which is rarely true from a dietary perspective.

However, it does highlight just how beneficial this humble fruit is promising to be. My modification would be, eat it very regularly in pumpkin season – which is now.

There are a million and one ways to enjoy pumpkin – roasted first ahead of time and then added to salads, curries or blended into a sweet and hearty soup are my standard routines throughout the week. However, whenever you’re trying to indulge in a particular type of produce and really make the most of its season, you really do need to think outside the box and get familiar with a few recipes that keep you enticed. Pumpkin bread is a good one as it can be made in bulk and stashed in the freezer if you have the space.

This brings me to jam.

If you haven’t tried pumpkin jam (or pumpkin butter as it’s referred to in the states), it’s worth giving this quick recipe a go. Over there, it’s usually made with tinned pumpkin puree as a base, which creates a pretty heavy product. Fresh pumpkin yields a much more delicate flavour, especially if you combine it with other fruits.

I’ve written this recipe for people who have never made a jam before. Aside from creating different flavour combinations, jam-making is more of a science than an art. The wonderful thing about the unique type of pectin found in pumpkin is that it gels so easily that there is no real need to constantly monitor the temperature. It thickens up beautifully and then you take it off the stove.

This recipe can be tweaked and combined with any other fruit. I’ve tried apple (which is the more traditional accompaniment), a whole orange to make more of a marmalade (delicious!) and mandarins.

Pear is my pick of the bunch, to date, but then I do have a bit of a soft spot for them at the best of times.

I like to use golden sugar which you can buy at most health food stores. It’s essentially just evaporated sugar cane juice and so is closer to its original state and contains marginally more minerals than plain raw sugar. However, we’re not truly going to kid ourselves that this jam is being consumed for heath reasons. Sugar is sugar and jam is jam. This recipe is just another creative way to enjoy pumpkin that you may not have tried previously.

This recipe makes one 350ml jar.

Well, folks, there’s a few ideas for you whilst we’re in peak pumpkin season. Go and stock up on this wondrous gut-healing fruit at your local farmers market (I get mine from a local grower via the Nurtured Earth girls, online). Commit to a bulk roasting session and you’ll have sweet, caramelised pumpkin on hand to take the nutritional value of your mid-week meals up a notch.