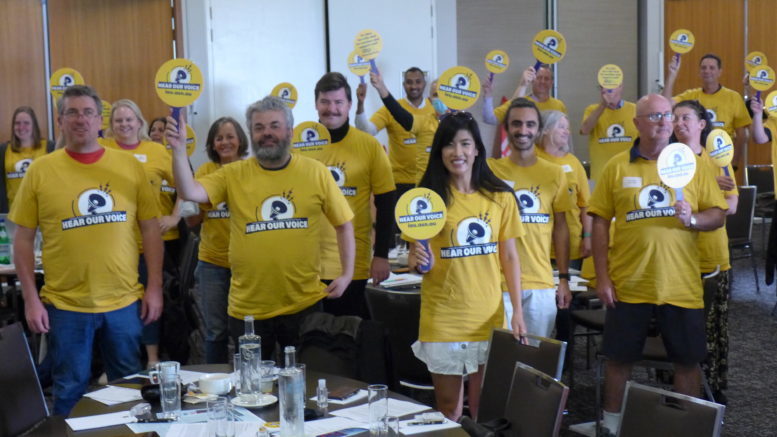 Central Coast members and delegates at the Branch Council in March

Around 1,000 teachers and support staff at the region’s Catholic schools are expected to walk off the job on Friday, May 27, as they join action throughout NSW and the ACT demanding better pay and conditions.

More than 17,000 teachers and support staff in 540 Catholic diocesan schools are striking in support of five key claims for their new enterprise agreement.

The Independent Education Union (IEU) executive has endorsed the full-day stop work, with rallies to be held across the state.

IEU NSW/ACT Branch President, Chris Wilkinson, who lives on the Central Coast, said the action would involve not just teachers, but also support and ancillary staff.

“Teachers at the moment are drowning in administrative and data collection work they are being asked to do as well as teaching,” Wilkinson said.

“This is exacerbated by staff shortages due to COVID-19 and other illness.

“Teacher’s are being asked to ‘babysit’ classes because there are no casuals available to fill the gaps and this is taking up all the time they usually have for preparation and planning.

“It’s not good enough – we are concerned about teachers’ mental health and wellbeing.

“We need to give them the time they need so students can have the best education possible.”

Wilkinson said staff from around the Coast were like to join major rallies in Sydney or Newcastle on the day.

“Teachers and support staff across both the government and non-government sectors are dedicated professionals pushed to breaking point,” he said. “Schools have been running on goodwill, but it is rapidly evaporating.”

The move follows a formal balloting process complying with strict federal laws run across all 11 Catholic dioceses by an external agent.

“The sharply rising cost of living, lack of real wages growth, ever-increasing workloads and the pandemic have caused crippling staff shortages in Catholic schools. Our members are exhausted and burnt out,” Northam said.

“Catholic school employers are following the NSW Government’s lead in limiting pay rises to 2.04 per cent, a short-sighted approach that has resulted in the current staffing crisis. Teachers are leaving the profession and graduates are not entering it.”

The IEU is calling on employers to: pay teachers what they’re worth (an increase of 10-15 per cent over two years); give support staff a fair deal (pay parity with colleagues in public sector schools); let teachers teach by cutting paperwork; allow time to plan (two more hours release from face-to-face teaching per week); and end staff shortages.