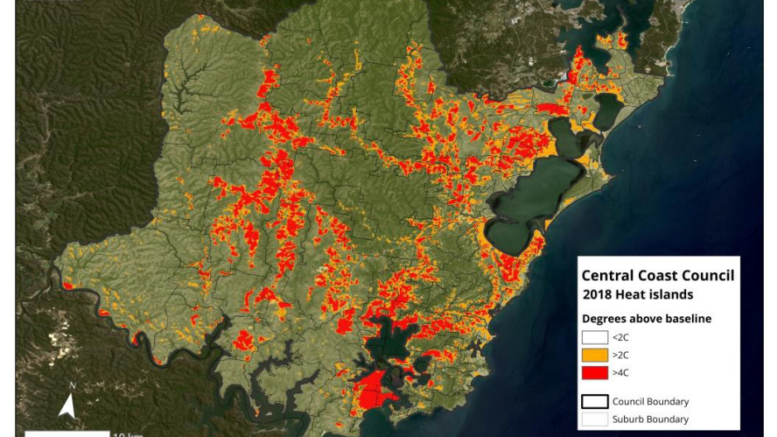 Heat Islands across the coast are highlighted in red

More than half of land zoned for future open space needs to be acquired by Central Coast Council, the council-under-administration’s newly endorsed Green Grid Plan shows.

A first of its kind for regional NSW, the Plan aims to deliver an interconnected network of open space that will keep the Coast’s major centres cool, encourage healthy living, enhance biodiversity and ensure ecological resilience.

The plan says that 35 per cent of land zoned RE1 is owned by Council, “leaving 65 per cent as areas for future open space as a result of future acquisition”.

The Green Grid establishes a framework for planning and identification of future projects.

Current availability of open space found that 89 per cent of people lived within a 400m radius of publicly owned land but this was not equal across each of the 17 Social Planning Districts and a large proportion of these areas contained no mapped open space improvements, such as play equipment, outdoor gyms, or paths.

They are among more than 20 pages of projects attached to the report but they are not endorsed by Council, nor has detailed costing assessment been undertaken, the report says.

“The intent of the Plan is to shape the future character of the Central Coast through understanding current natural and built assets and how these can be connected in the future.

“It is intended that the Plan will be used as a framework for LGA-wide and local place planning in the region for the next two decades and beyond.”

Overarching aims of the green grid include improving the liveability and walkability of local centres, improving climate resilience and supporting ecologically sustainable development.

Anything done as part of the overarching Green Grid needs to be sympathetic to the aims of the six grids.

The agricultural grid explains that the Central Coast contains 22,327 ha of land that is zoned either for Primary Production (zoned RU1) or as a Rural Landscape (zoned RU2) in relevant Local Environmental Plans.

Council completed a rural lands audit in 2020, through visual assessments of properties to determine the types of uses that were occurring within each zone.

“In both RU1 Primary Production and RU2 Rural Landscape zoned land, rural living was the predominant use where no dominant commercial use was observed,” the report said,

Commercial fishing licences occur over waters of the region, which allow for the harvesting of fin fish, prawns and crayfish.

In addition, 4,390 ha of aquatic leases for the farming of oysters occur along the Hawkesbury River and in Brisbane Water.

The agricultural grid aims to identify and support key agricultural and rural areas, to strengthen production and connection to agricultural lands, and encourage the maintenance of the rural landscape.

“This will be achieved through identifying important agricultural land zone for these uses, encouraging quality agricultural nature based tourism ventures, to establish the region as a key destination for these types of activities such as farm tourism,” the plan says.

“This will be achieved through providing connectivity to centres and places of interest such as shorelines, beaches and public reserves,” the plan states.

The Central Coast contains 460 heritage listed items which represent a wide range of items including houses, trees and ruins.

There are 24 items that are listed on the NSW State Heritage Register.

The cultural grid aims to conserve and interpret areas and items of cultural significance.

It will also promote opportunities for cultural tourism and economic development, Council said.

The ecological grid aims to maintain ecological processes through improving ecological resilience within natural areas in response to increasing pressure from climate change, urban development and other indirect impacts.

The ecological grid will also ensure areas of higher biodiversity value are adequately protected and managed and will encourage community behaviours that protect and enhance ecological values.

The recreational grid aims to improve connectivity, accessibility and quality of open space.

This will be achieved through encouragement for participation in outdoor activities, improving opportunities for sustainable outdoor recreation within natural areas, including establishing the Central Coast as a destination for such activities.

The hydrological grid aims to protect and enhance natural waterways and coastline.

This will occur through best practice management of waterways.

Council Administrator, Rik Hart, said adoption of the plan was a key milestone in ensuring the region’s long-term liveability.

“The Plan will be used as a framework for LGA-wide and local place planning for the next two decades and beyond and is expected to streamline project alignment for future public projects,” Mr Hart said.