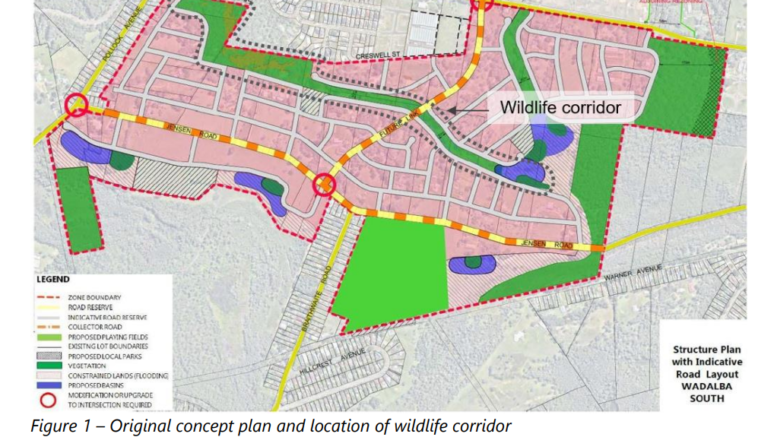 The process to update the local environment plan will take some time.

A total of 12 landowners at Wadalba will be affected when Central Coast Council corrects a wildlife corridor error.

The area known as Precincts 2A and 2B of the North Wyong Shire Structure Plan was rezoned to enable low density residential development of about 1200 residential lots, except flood prone and other lands required for conservation, recreation and infrastructure purposes.

During the public exhibition of a rezoning proposal in 2018, no objections were received from landowners on the width of the wildlife corridor which was exhibited as 30m.

Following investigations, Council later determined that 30 metres was insufficient to facilitate optimal Glider dispersal and that the corridor should be widened to 40 metres.

The Development Control Plan was updated to identify a corridor width of 40m but when the Local Environment Plan mapping was finalised, the width of the central wildlife corridor was not accurately scaled.

And now Council says increasing the width of the corridor to 40m is a requirement of the Biodiversity Conservation Division (formerly known as the Office of Environment and Heritage).

This is the start of a long process.

“Given the nature of the proposed amendment is to correct the width of the central wildlife corridor which was not accurately scaled when the Wyong Local Environment Plan (WLEP 2013 mapping was finalised, it is considered the proposal meets this requirement and that a s3.22 application be prepared and forwarded to the Department of Planning and Environment (DPE),” Council said.

“Once DPE has assessed the proposal, they will arrange the preparation of a draft LEP and forward the amending LEP and s3.22 application to the Minister for determination.”

If the Minister determines the amending LEP is in accordance with the Act, public notification will occur through the NSW Legislation website.

Before the Council meeting on March 22, a town planner spoke at the public forum on behalf of developers who do not wish to lose the land from their blocks but Council said it is a minor mapping error that needs tidying up.