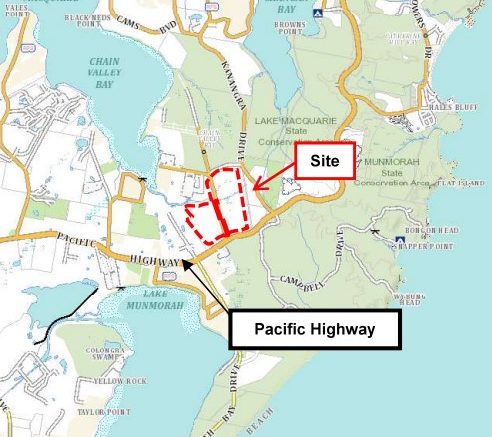 It’s been brewing for seven years but the Draft Planning Proposal for the site that will support 627 homes on the Pacific Highway close to Chain Valley Bay, Gwandalan and Summerland Point has finally landed, ready for public exhibition.

The objective of the Planning Proposal (PP-2021-917) is to enable the land, which runs alongside the Pacific Highway heading east and touches Kanangra Drive – a one road in, one road out – servicing Gwandalan, Summerland Point and the soon-to-be Crangan Bay estate, to be developed.

Owned by the Darkinjung Land Council, the site was identified in the North Wyong Shire Structure Plan 2012 as one of several ‘strategically located, constrained sites’ that had development potential in the area.

To the north of the site is a bushland corridor that runs to Point Wolstoncroft, part of the Lake Munmorah Conservation Area, while to the south, on the other side of the Pacific Highway, the Conservation Area continues.

DPIE aligns the proposed development with the upcoming Central Coast Regional Plan 2041, listing the site as commensurate with the plan to “create a 15-minute region made up of mixed, multi-modal, inclusive and vibrant local communities.”

Some residents are sceptical of a 15-minute region, stating that infrastructure, traffic, education and services are already strained without the added pressure of adding more developments to the mix.

“A new shopping complex and much needed curb and guttering, and road repairs would be a good place to start.

“Maybe the bureaucrats should sort out existing issues first,” he said.

DPIE argues that the site “is located near to the Lake Munmorah centre, which offers a range of services to support the local community.”

“The site also has frontage to the Pacific Highway, which provides access to the broader region by car or by public transport.

“There are existing bus services to the site that provide access to the region through connections with other bus networks and train services between Sydney and Newcastle,” it said.

Public transport connections to Sydney and Newcastle run via Wyong or Wyee stations.

Buses run every 1.5 to two hours from the area to those stations, with the average bus time from the Lake Munmorah Shopping Centre – a seven-to-eight-minute drive from the proposed site – taking at least one hour.

Connections on to Sydney and Newcastle by train vary from 50 minutes to two hours.

The proposed entry and exit for the development will sit on Chain Valley Bay Road that meets the Pacific Highway.

A traffic plan for the site, generated in 2018, showed that a signalled intersection will have to be put in place to deal with increased usage.

However, it notes that given the planned rise in development all along this section of the Pacific Highway, it will most likely need to be remodelled by 2031.

DPIE said that every attempt has been made to guarantee biodiversity with “a corridor to the north of the site provided for by a 300m minimum buffer width similar to the site’s western section”.

This plan, which is officially known as the “Lake Munmorah/Crangan Bay, Rezoning land at Pacific Highway and Kanangra Drive” project is one of 12 parcels of land that have been earmarked by the DPIE in its 2041 regional plan to meets its housing targets.

These proposed sites can be seen below.