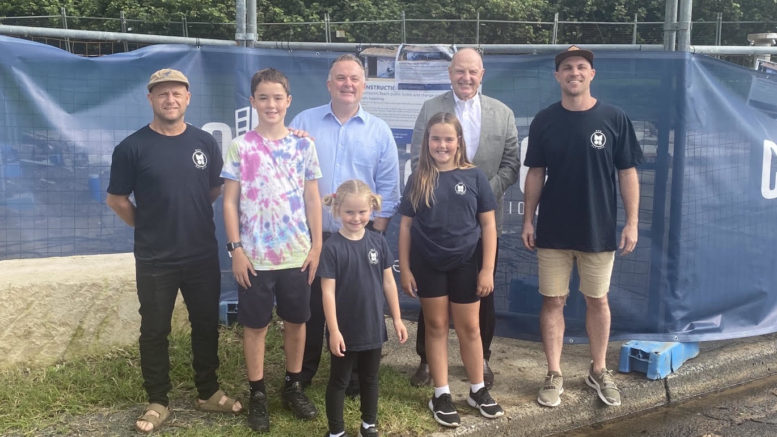 Macmasters Beach Boardriders are set to have a new home thanks to a major upgrade of the area’s community facilities being jointly funded by the State Government and Central Coast Council.

The beginning of the upgrade work was marked on April 6 by Parliamentary Secretary for the Central Coast, Adam Crouch, Council Administrator, Rik Hart and Macs Own Boardriders Vice President, Ryan Davey.

“Macmasters Beach is a postcard suburb next to Bouddi National Park and a haven for both locals and tourists,” Crouch said.

“These upgrades will improve an essential facility, used by the whole community – including local surfers, who will also benefit from new amenities and storage facilities for boards.”

Hart said the new public toilets and change-rooms would provide an improved and more accessible facility.

“Although tucked away in a remote location, Macmasters Beach is very popular with visitors to our region,” he said.

“This partnership with NSW Government has enabled Council to commence work on much-needed community infrastructure.”

The upgrade will include three unisex toilets, a unisex accessible toilet and two unisex ambulant toilets; one change-room and a family room with toilet and three outdoor showers.

Perhaps most exciting for local surfers is a designated storage area for Macs Own Boardriders, to support its training and competition events.

Davey has been a member of the Boardriders group since it started in 2005.

“I wear quite a few hats – I’m also the secretary and treasurer at the moment,” he said.

“This is going to give us a home – a space where we can store our equipment, which until now has been kept at people’s homes and in a trailer.

“It will be great to have a designated space for our equipment, which includes tents, competition equipment, sponsorship flags and things like tables and chairs.

“It will give us somewhere to congregate after competitions, and to display our plaques. We’re also hoping to set up a life members’ board – it will be a place to share stories and memories.”

With a membership of around 120, the club began its Mini Mob three years ago, for aspiring boardriders aged nine to 12.

“We work with Central Coast Surf Academy and pay for their coaches to come along and work with the kids,” Davey said.

“We run it at a bit of a loss but it is backed by sponsors and along with coaching sessions, the kids receive a T-shirt and are able to surf in our competitions. We’re starting with the younger generation to grow the surfing community on the Coast.

“We have members from Bensville, Empire Bay, Copacabana and surrounding suburbs including Killcare and Wagstaffe.

Works on the upgrade are expected to be completed by the end of July, weather permitting.