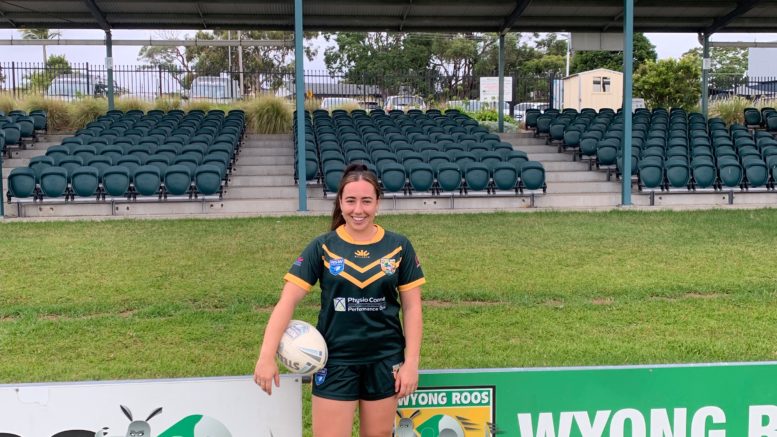 Wyong Roos is celebrating the debut of its first ever senior women’s rugby league team, as the Club gears up for the forthcoming footy season.

The ladies over-17s tackle team (the name of which differentiates it from the highly-popular OzTag and touch games) will play in a combined Central Coast and Newcastle competition that will feature eight, or possibly even 10 clubs, this season.

Wyong Roos already boasts three junior girls tackle teams for the under 13s, 15s and 17s, with a total 70 girls enrolled in the club.

Head Coach Mitch Williams said the open women’s team had taken two years to get off the ground.

“We are super excited to have the ladies representing Wyong.

“It’s been some years in the making but we have had so many girls that are so keen to play football, we have finally got there.

“There has been a hole in the market for girls who want to play contact sport, so as a Club here at Wyong, we are over the moon to make this happen,” he said.

Williams has been the driving force behind a high school league program since 2013 – a factor that has helped foster the interest of girls who are keen to play the sport.

“We have really seen a shift in the last five years of more schools joining our program.

“It’s not just for kids who are already great at rugby league, it’s for the kids who love it and are committed to getting better,” he said.

The program has nurtured girls, some of whom already play touch football, who are looking at moving in contact sports by taking part in day programs where they play sevens or nines.

To help boost even more female participation in the game, Wyong has promoted football administrator and the high school program facilitator Sarah Dimech to the role of Ladies Coach and Development Officer.

Dimech has been instrumental in developing the program for girls at local high schools such as Lake Munmorah High, Gorokan High, McKillop, and Wadalba High.

Having played footy since the aged of six – where she joined the boys on the field until she was 12, – she then went on to represent Australia in Oz Tag.

Dimech said she cannot wait to get the games going.

“It’s going to be an exciting year for us.

“It’s taken a while to get to the point where we have the players for this Ladies team and I’m confident it is going to go from strength to strength,” she said.

Jersey sponsor for the women’s team is Physio Connex that also provides physiotherapy services to the club.

Owner Melinda Dennis said Physio Connex was excited to see the inclusion of the team at Wyong Roos this year.

“I have been a part of this club for nine years and to see the evolution to now include a women’s open side is truly warming to see.

“I currently work with the women’s Australian Jillaroo’s program as well as the NRLW Sydney Roosters side.

“For us at Physio Connex, we have a huge passion to deliver our experience with the female rugby league athlete as local girls aspire to be included in the game and make it to the top.

“It is important to not only have clubs and coaches ready and eager to provide females with their knowledge and support, but that also must extend to the medical and performance team around them who understand the demands of the game.

“We are very excited to be a part of that process for the Wyong community,” she said.

Wyong Rugby League Club is the oldest established club on the Central Coast.

It was the feeding club for the Dooralong, Wyong, Jilliby, Tuggerah and Morriset regions and the initial home base was located at Baker Park in Central Wyong.

In 1971 the club purchased five-and three-quarter acres on what was then known as Arizona Road, Kanwal.