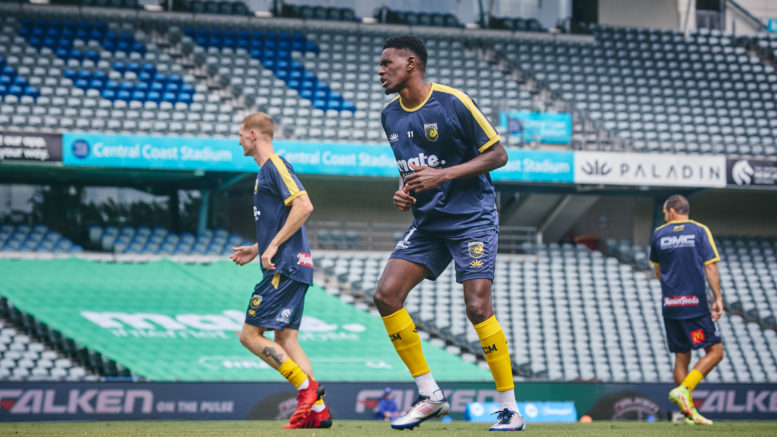 The Central Coast Mariners have won their first match of 2022 defeating Brisbane Roar, 2 – 1 in Gosford on Saturday evening, March 5.

The long awaited victory not only ended seven games without a win, but also brought an end to 20 winless A-League matches against Brisbane Roar: together making for a positive turnaround to help celebrate goalkeeper, Mark Birighitti’s 150th match in the A-League.

In a bottom-of-the-table contest that was fairly even in terms of possession, it was the hosts’ high aptitude for shooting on target that set them apart from their opposition and other recent performances.

Head Coach, Nick Montgomery expanding his attacking options in the starting XI including the team’s four top goal scorers, Oliver Bozanic, Beni N’Kololo, Jason Cummings and Marcos Urena, with the ever-ready Nicolai Muller also in search of his first goal for the season.

This line-up threatened the Roar defence in the 34th minute, with assistance from Bozanic’s lob deep into the penalty area for N’Kololo to chase and feed to Cummings on the prowl.

With Roar goalkeeper, Jordan Holmes, out of position, it took a desperate, last-ditch clearance by Scott Neville to deny Cummings a goal, and to ensure a half-time deadlock at 0 – 0.

This scoreboard status was soon to change only four minutes into the second half with an opening goal for N’Kololo, his third in as many games.

The assist came from Cummings with a deep cross from the wide midfield, catching N’Kololo on his advance behind the back of Roar’s Louis Zabala.

His first touch, cross-goal strike drove the ball low past Holmes, too fast to prevent it deflecting off the side-post and into the net.

Six minutes later, a second goal came for the Mariners via Muller’s free kick: the first in blue and yellow for the German signing.

Positioned centre field on the outskirt of the penalty area, Muller avoided the defensive wall to his left and shot the ball right, where it skimmed the head of James O’Shea and deflected into the corner, beyond the reach of Holmes.

This two goal lead gave the Mariners a cushion ahead of Roar up until the 69th minute when the Roar’s O’Shea took his opportunity with a move out wide to gain space from Kye Rowles in defence.

His cross into the box found the head of Juan Lescano, well positioned in between Ruon Tongyik and Dan Hall for a simple knock over the head of Mark Birighitti in goal.

A trio of substitutions followed for the Mariners to compress their defensive structure, with Head Coach Monty intent on preventing another late game goal slip.

Multiple chances on goal came for Roar in the preceding minutes but were denied by the deft touch of Birighitti.

In the final minute of injury time, O’Shea had one last chance to equalise, but his left-footed shot soared wide and was shortly followed by the match’s final whistle.

“What’s happened the last couple of weeks has been freakish, if I can use the word,” Monty said in his post-match press conference.

“(Brisbane) made it really frustrating for us in the first half, with five in the back, four in midfield and one up front, just looking to catch us on the counter-attack, so we had to break them down and it was a fantastic pass from Jason Cummings and Bennie (N’Kololo) with a good finish.

“I think after that it was just a matter of time before we got the second.

“I thought (at) two – nil we probably should have killed the game off (but after the Brisbane goal) I think everyone in the stadium was a little bit worried.

“Nail-biting at the end but with three points we move on to the next game.”

This will be another home match scheduled for Wednesday, March 9, against Melbourne Victory.