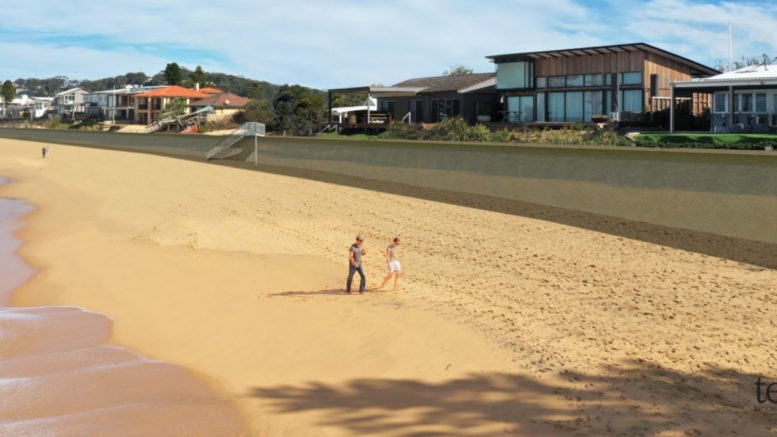 A concept design of the preferred seawall option

Central Coast Council is pushing ahead with plans for a seawall to address ongoing erosion issues at Wamberal Beach, with a preferred design having been identified, but the Wamberal Save Our Sand group has slammed the latest development.

With the Wamberal Beach Terminal Protection and Sand Nourishment Investigation project now complete, a Cost Benefit Analysis (CBA) has been released online at yourvoiceourcoast.com, with feedback welcome until March 20.

Council CEO, David Farmer, said that by identifying a long-term solution, Council is fulfilling its role as a certifying authority for development, while ensuring legislative obligations are undertaken with guidance from community consultation.

He said by completing the investigation project, Council had delivered on some key management actions of the certified Coastal Zone Management Plan (CZMP).

“The review of all expert technical studies, extensive community consultation and consideration of Council’s role and legislative responsibility in relation to coastal erosion have highlighted specific criteria for a preferred seawall design as the most effective and viable long-term solution for beach erosion at Wamberal,” Farmer said.

“The preferred seawall design will have the least impact on the beach, as it will be located behind current ad-hoc coastal protection works.

“Those ad-hoc works would then be removed (resulting) in greater beach width.

“Without terminal protection and the implementation of the long-term strategy, coastal erosion will continue to threaten private homes, public infrastructure and expose ad-hoc structures.

“Beach erosion will incrementally get worse and require a continuation of expensive emergency works that are not designed for a long-term solution or a holistic approach.”

Farmer said Council’s role to serve the community, including residents, visitors and landowners who have legal rights under approved developments, needed to be balanced with impacts on beach access, public amenity, neighbouring properties and the general health of the coastline.

Council Administrator Rik Hart said the community has been waiting a long time for a long-term strategy to address erosion at Wamberal.

“Council has delivered on identifying a preferred terminal protection option based on extensive expert technical studies and data with high consideration to community feedback and Council’s environmental and financial responsibilities, and legislative obligations,” Hart said.

“I acknowledge that there are some groups and residents that are opposed to a seawall and I understand their concerns.

“However, by not progressing with a viable long-term solution for coastal erosion at Wamberal it will only get incrementally worse and require additional emergency works which would negatively impact beach aesthetic and usability.

“The community can rest assured that all options have been investigated and relevant considerations undertaken to reach this milestone of identifying a viable strategy.”

Wamberal Beach Save Our Sand (SOS) is “extremely disappointed” to see Council continue to pursue a seawall option.

“Council has continued to fail in addressing the real community issues and concerns associated with erosion issues at Wamberal and has once again highlighted the lack of respect to the greater community who use the beach,” Naven said.

“Despite ongoing concerns, supported by experts on beach erosion, local resident groups have been ignored and the State Government-led ‘tunnel vision’ of Council has continued to steamroll towards the building of a vertical wall along Wamberal and Terrigal beach that will eventuate in the destruction and permanent loss of both beaches.”

He said opposition to a seawall by the wider community of Wamberal was informed by expert scientific opinion.

A recent parliamentary petition opposed to a seawall at Wamberal received over 2,200 signatures.

Naven said surveys and other engagement activities have been “deliberately skewed” to achieve a seawall outcome.

“The CBA only investigated seawall options, rather than a wide range of all possible options to find what is best,” he said.

“The last time a CBA was conducted into all possible options it was revealed a seawall would have the highest costs of all options; Council has entirely ignored this.

“Our group would like to see another Cost Benefit Analysis commissioned, investigating all possible options, including sand nourishment, planned retreat, groynes, artificial reefs and dune revegetation.”

“Such a group would allow for open discussion and effective consultation between experts, community groups, homeowners and Council to ensure all interests are represented in the eventual solution,” he said.

“Wamberal Beach SOS is about doing the right thing for our beach and our community.

“We believe, to achieve this, we need all options investigated.”

A report will come back to council in coming months.