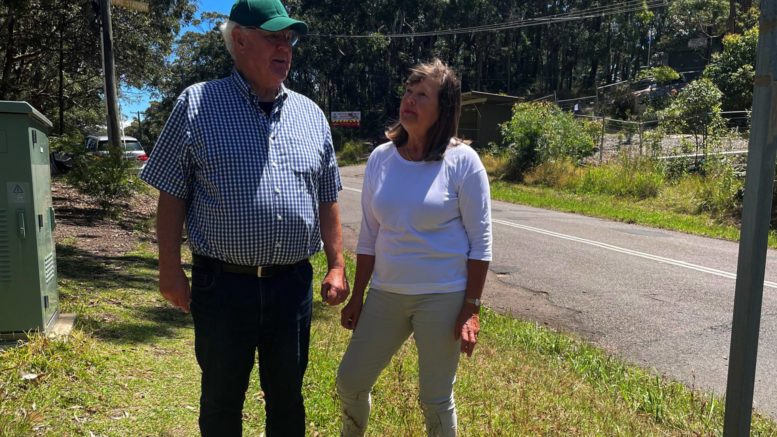 Bruce Gregory and Carole Webb at the corner of The Scenic Rd and Ocean Dr, Macmasters Beach

The Wagstaffe to Killcare Community Association (WKCA) has thrown its weight behind residents agitating for more action from Central Coast Council on huge potholes along The Scenic Rd, which is one of the main thoroughfares between the Peninsula and Kincumber.

In December, Killcare Heights residents Bruce Gregory and Carole Webb accused Council of wasting taxpayers’ money fixing sections of the road at Macmasters Beach which are not in need of repair, while one section riddled with potholes goes unattended.

They highlighted a section of the road between Ocean Dr and Cripps Cl as being riddled with deep potholes, causing severe damage to motor vehicles and posing a huge threat to public safety.

Gregory received a response from Council saying that best practice pavement management involves a range of road treatments depending on road condition, road classification and traffic volumes, treatment history and maintenance cost, with treatments triggered at different stages of the road’s lifecycle.

“The renewal of Scenic Rd has been assessed in-line with the above process, with sections of the road between Bombi Rd (North) to Bombi Rd (South); Bombi Rd (North) to Cripps Cl; Cripps Cl to Namatjira Dr, being identified for road renewal works during the 2023/24 financial year,” the response said.

Gregory says this response is not satisfactory, with one resident reporting just last week that he had to buy two new tyres for his wife’s car as the result of a deep pothole on The Scenic Rd opposite Ocean Dr, not easily seen because of dappled lighting filtered through the tree canopy.

WKCA President Mike Allsop said the group had been agitating to get higher priority given to the infrastructure supporting the Bouddi suburbs and backed calls for improved road maintenance along The Scenic Rd.

“They have been neglected for far too long and with increasing population and visitation,” he said.

“While our interests usually focus on the area between Killcare Heightsts and Wagstaffe, the only two access roads to the Bouddi peninsula suburbs are The Scenic Rd and Wards Hill Rd.

“Of the two, The Scenic Rd is by far in the worst condition, amplified by more open speed limits on certain sections.

“We also have major concerns over the alignment and width of Araluen Dr at Killcare, which forms a continuation of access to Hardys Bay, Pretty Beach and Wagstaffe in one direction, and to other parts of Killcare in the other.

While Allsop said the Council response was “technically correct” with respect to planned re-sheeting, it seems to lack any sense of urgency in addressing complaints and hazards.

“At issue is the repeated failure of pothole and verge repairs once made, hence the point by Mr Gregory about doing the right job well rather than the wrong job poorly,” he said.

“We would ask Council to prioritise inspection of the arterial and local access roads in our area and implement sound improvements in alignment and road surface condition.

“We know they can do it; we just ask that this area be given greater priority in attention and budget allocation.”