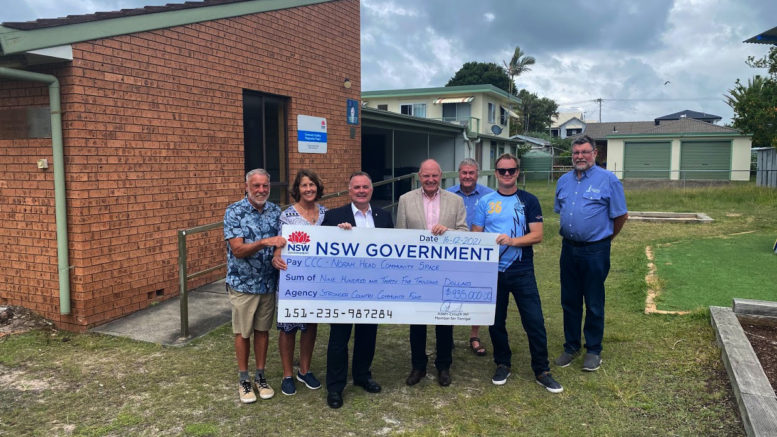 Parliamentary Secretary for the Central Coast, Adam Crouch and Council Administrator Rik Hart present a cheque to the Norah Head community for their new hall

Norah Head is to benefit from a new community hall to be built on the grounds of the hockey club oval.

Backed by a $935,000 boost from the NSW government’s ‘Stronger Communities Fund’, it will replace the existing hall at 75 Bungary Rd that is earmarked for demolition.

Funding for the new hall followed a decision by the Council to sell the Bungary Rd land.

Community groups were vacated from the hall a year ago when the Council revealed that the hall was part of its ‘Tranche Three Asset Sale Program’.

The hall was also infested with termites and unfit for continued public use.

The asset sale prompted concerns from the community, including Norah Head Residents, Ratepayers and Coastcare Association.

Locals stressed that the site was originally gifted to the Council and should not have been made available for sale.

Among those evicted were Norah Head Playgroup, which had used the hall for 43 years.

The playgroup campaigning team, which included Treasurer LeChae Rowan, called for the site to be repaired and maintained, or a new hall to be provided to the community.

They are relieved to hear that a decision has been reached, even though some of the concerns of the community were not formally addressed.

“The new hall is a great thing for the community.

“We look forward to seeing what the Council has planned,” said Rowan.

The designs for the new facility, which will be delivered as part of a package including a play space, greenspace and improved parking, are yet to be unveiled.

Council has stated it will liaise with the community and local stakeholders during the planning phase.

“This funding will help Council to continue its commitment to providing valuable services that strengthen and support the Central Coast community,” Parliamentary Secretary for the Central Coast Adam Crouch said.

“Norah Head locals, visitors, community groups and associations who have loved the Norah Head Community Hall for many years will now be able to enjoy a brand new, accessible facility for many more years to come,” said Central Coast Council Administrator, Rik Hart.

Council had previously stated that the 75 Bungary site will be put on sale once the new hall has been opened.

Member for Wyong and Shadow Minister for the Central Coast, David Harris, said he congratulated the Norah Head Community who presented strong opposition to Central Coast Council’s plans to sell the land which is the site of the areas’ only community hall.

“The NSW Government has provided a $935 000 Stronger Country Community Fund grant which will see the site upgraded with new hall, playground and parking,” Harris said.

“This would not have been possible without the efforts of the Norah Head Playgroup, Norah Head residents/ community group and Save Norah Head Community Hall group that led the campaign to protect the site from sale.

“This was a grassroots campaign led particularly by a group of mums trying to protect their access to a site for their playgroup in the best interests of their children.”

He said he and Emma McBride, Federal Member for Dobell made representations to Council and spoke in Parliament on the importance of the hall to the community.

“Emma and I were pleased to lobby Council on behalf of the local residents, and we are pleased that common sense prevailed,” he said.

“I also thank Administrator Rik Hart who listened to the community and reversed the decision to sell the land.

“This is an example where politicians all work together across party political lines to get a great outcome for the community.”

He said he thanked Adam Crouch for listening to community concerns.