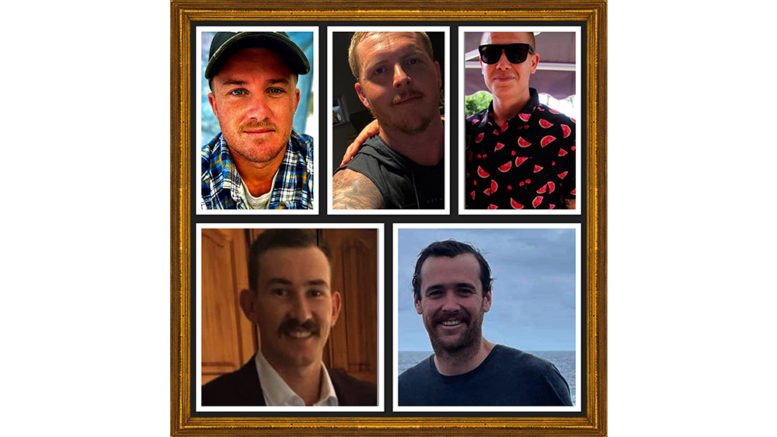 Five men will complete a 24-hour walk chained to each other from Belmont to Terrigal on February 5-6, all in the name of raising awareness and funding for men’s mental health.

Jason Wileman of Toukley, Mathew Johnstone of Gorokan, Harley Beckett of Blue Haven, Scott Reed of Woongarrah and Rhys Dawe of Gorokan have all been affected by mental health issues at some point in their lives.

“All five of us have dealt with some sort of mental health battle and we also have some close mates who are still struggling,” Johnstone said.

“We have been lucky enough to get on top of it and come out the other side so we wanted to share our journey and let people know it is OK to talk about your feelings.

“Rhys recently lost a close mate to suicide and I work as a funeral conductor.

“What I see every day pushed me to want to help even more.”

The men will begin the walk from the 16ft Sailing Club at Belmont at noon on February 5, chained and padlocked together with hardware donated by Bunnings, and with a metre of chain between each of them.

After walking through the night, they expect to arrive at the Terrigal waterfront at around noon on February 6.

“We all play football, with the Killarney Vale Bombers and with The Entrance/Bateau Bay but we haven’t really been doing much to prepare for the walk,” Johnstone said.

“We know it will be mentally and physically taxing but the point is to push ourselves to the limit.”

The walk will raise funds for the Gotcha4Life charity which works in suicide prevention.

“We want to see the stigma broken for men’s mental health,” Johnstone said.

“We want every bloke to know it’s OK to speak out as it doesn’t make you any less of a man to talk.

“We are showing that if one of our brothers is tired or struggling, we won’t be leaving them behind.”

Johnstone said the five would welcome anyone who wanted to join them for part of the walk.

“We’re trying to organise members of our football clubs to do a lap or two as we pass EDSAAC stadium to show solidarity as a football family,” he said.

“Our family and friends will join us as we come into Wamberal to walk with us up the hill and into Terrigal, where we will finish the walk on the waterfront opposite Crowne Plaza.

“We’ll be pretty exhausted by then, so it will be a great pick me up.

“If you see us, come and walk with us.

“Say hi and tell us your stories.

“You have five men (who) want to hear your stories – all ears and no judgement.”

The men’s fundraising page had raised more than half of its goal of $5,000 as we went to press.

To donate, go to https://gotcha4life-fundraising.raisely.com/mathew-johnstones-team