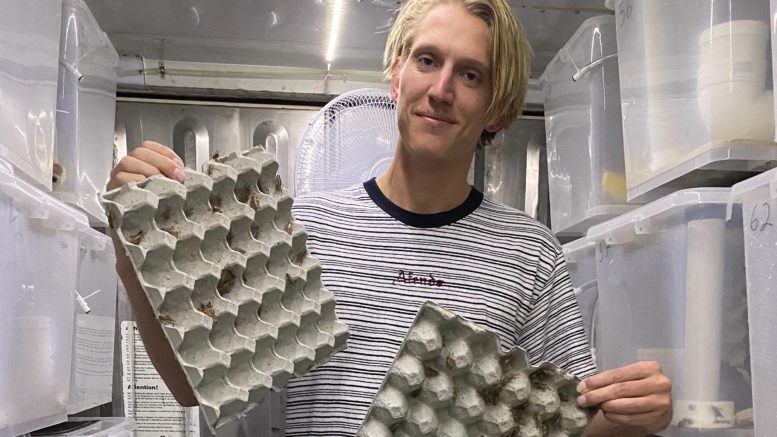 Mikkel Overgaard of Kincumber is convinced cricket-based protein will become a dietary staple in Australia and he is determined to be at the forefront.

Overgaard moved to the Central Coast with his family from Denmark when he was 10 and after several years of world travels has returned to the region and established a new company.

“I travelled for a few years in Europe and lived in Canada for three years,” he said.

“While I was there I went to visit a farm where they were breeding crickets for human consumption and was fascinated.

“I decided I wanted to go down that route when I returned to Australia.”

“I started out selling live crickets to breeders and various outlets for reptile consumption, but the goal was always to move towards breeding them for human consumption,” he said.

“There was quite a process involved – I had to obtain the necessary approvals,” he said.

“That is done now and I am approved to breed the crickets for human consumption.

“As well as the items already being produced, we are working on other products such as protein balls and cookies.”

While the farm is open for inspection by appointment, Overgaard sells his products online with hopes of expanding into the retail market.

“Quite a few people are fascinated to come and look at the operation but we have to follow security protocols to avoid disease and pests,” he said.

Overgaard begins to breed the crickets from the age of five weeks and has around 25,000 insects on the farm.

“We really think this is an up-and-coming food source which is environmentally friendly,” he said.

“It is a complete protein, containing nine amino acids.

“I realise eating insects is not for everyone but many of our customers are active young people, very health conscious.

“Many of them have cut back a lot on meat consumption for environmental reasons.”

Overgaard breeds the crickets from the age of five weeks and has around 25,000 insects on the farm.

“They are euthanised by freezing, then boiled for sanitisation before being roasted in the oven, then blended for the protein powder with flavouring added.”

Overgaard practises what he preaches.

“My partner and I love smoothies and have one every day, always adding two tablespoons of cricket protein powder,” he said.

“There are many full-scale farms in Canada the size of poultry farms with millions of crickets for human consumption and it is also very popular in Europe and the US.

“We are behind the eight ball but I think cricket products will play a big part in our future diet.”

For details go to grubprotein.com.au.