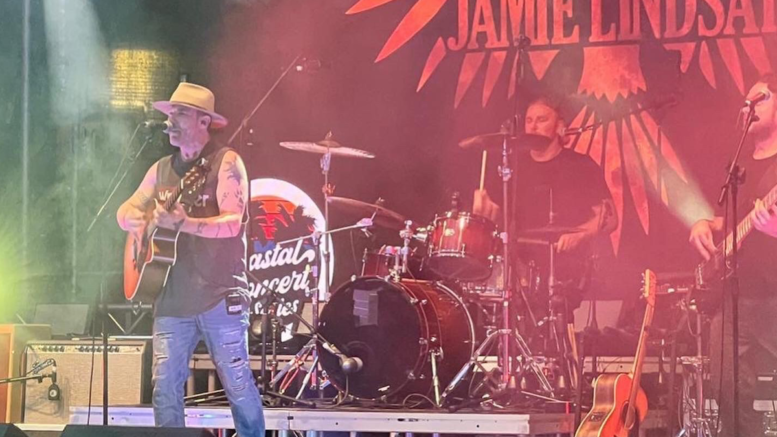 Central Coast singer-songwriter Jamie Lindsay is straight out of the blocks in 2022 with an uplifting new single.

Carry On is a message to those battling to get through each day.

Inspired by growing up around rural suicide and losing family and friends to their mental health battles, Lindsay said the song was a message of hope and about being grateful for all the positives we have in life.

Two years ago Lindsay was asked to support a men’s health and suicide awareness event at Wyong, and lost a friend not long after.

He wanted to let people know they need to reach out when suffering.

“I’ve never been that dark where I’ve felt I need to end my life, but we all have these really hard times in our lives (with) relationships, divorces, money pressures or whatever and you have these questions of would it just be easier if I left this world?” he said.

“I always just kick my own arse, and whatever it takes, find it in myself to see that others are doing it harder than me.

“Carry On (says that while) some days are dark, there will be people out there who will listen to you, people who love you and people who rely on you being here in the moment and being on the earth.”

Lindsay said if he reached just one person with Carry On, his purpose would be fulfilled.

“I want people to know that if they’re down, they need to reach out to someone,” he said.

“There are people out there doing it really hard – there is always going to be someone doing it harder than you, but at that moment you can’t escape yourself.”

Carry On, written, recorded and produced by Lindsay, was released on January 7 on all digital music platforms.

Born in Tasmania in 1977, Lindsay is a singer, songwriter, multi-instrumentalist, performer and music producer.

Jamie picked up the guitar at the age of nine and began writing songs through his early teens.

By the end of high school, he had become quite accomplished at the guitar and so the natural progression was for him to begin singing in order to get his songs heard.

He released his first music E.P when he was 18 and went on to become a top 10 finalist at the prestigious StarMaker talent quest at the Tamworth County Music festival in 1997/98.

Also in 1998, Jamie attended the Country Music College now knows as the “Academy”.

Jamie’s fundamental style is country music, however, throughout his 20+ year career, he has been involved in various other projects in genres such as Pop, Blues and Hard Rock.

As a performer, Jamie has been a big part of the Australian music scene with an average of 150 shows a year at various clubs, pubs and festivals with highlights such as a yearly spot on the NRL state of origin line-up and internationally through a Telstra hosted event on the USS Missouri in Hawaii.

Jamie has been fortunate enough to work alongside and learn from many industry personalities such as Harry Vanda (Easybeats/AC/DC), Tim Farriss (INXS) and Mark J Feist (Destinys Child/John Legend/Celine Dion).