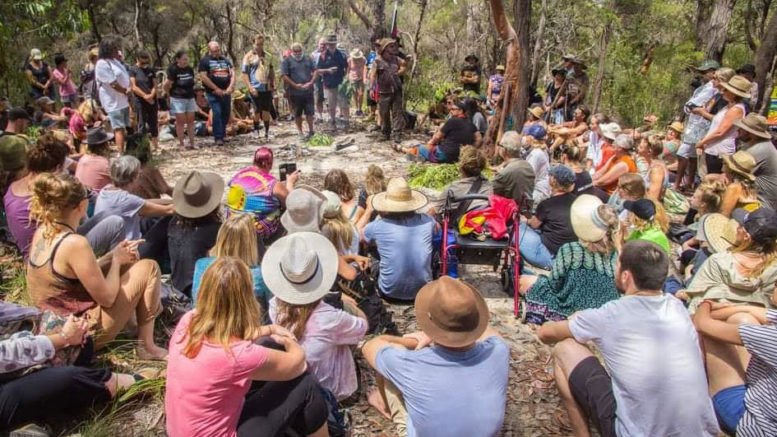 As calls came from the Indigenous-Aboriginal Party of Australia to have the Kariong Ridge area, from Staples Look Out to the Kariong hall, declared National Heritage lands, Traditional Bloodline Custodians of the Central Coast invited the community to come together in solidarity on January 26 to promote “caring for community and country”.

Direct descendent of the historical figure Bungaree from Patonga, Paul Craig , said January 26 was a day of mourning for many Indigenouos people.

“While we acknowledge the past, we want to bring people together to celebrate the fact that we are still here and peacefully rising up with our brothers and sisters from all backgrounds to care for country and community,” he said.

“With all the division in the world at the moment, it’s time for good people to unite for the sake of our children.

“We aren’t pretending that the past didn’t happen; many Aboriginal people are still suffering in many ways from the impacts of colonisation.

“Our goal was to invite the community to hear our stories and to work together towards a kinder and more caring society.

“We chose Kariong Sacred Lands to have a smoking ceremony as it represents where both the Indigenous and non-Indigenous community made a stand to protect Bambara.

“After nearly a decade of non-stop activism, over 40 peaceful protests, concerts and a camp on Woy Woy Rd for 89 days, we were successful and now all of this land is protected in the National Park.

“Myself and other family members have been working closely with Jake Cassar to preserve the land next to Bambara from a proposed housing development by Darkinjung Local Aboriginal Land Council.

“While we are not opposed to development, this area contains at least two registered Aboriginal sites and endangered ecological communities.”

Craig said Darkinjung Land Council does not represent the descendants of Bungaree.

“Our people, known as the Guringai, fully acknowledge the Darkinjung people who inhabited the western part of the Central Coast,” he said.

“The Guringai and Darkinjung came together to protect Kariong Sacred Lands at Bambara.”

Craig said Traditional Custodians have been in talks with Member for Gosford, Liesl Tesch, and Shadow Minister for Aboriginal Affairs, David Harris, looking for their support in protecting the sacred lands and having the Guringai acknowledged as the first People of the Central Coast.

“There are hundreds of people who can prove that they are direct descendants of Bungaree.

“To be able to express ourselves to hundreds of local men, women and children at Kariong Sacred Lands, and on a date that is so significant to our people, was an act of unity and reconciliation that we plan on having every year.

“To quote the late and great Martin Luther King: ‘We must learn to live together as brothers or perish together as fools’.”