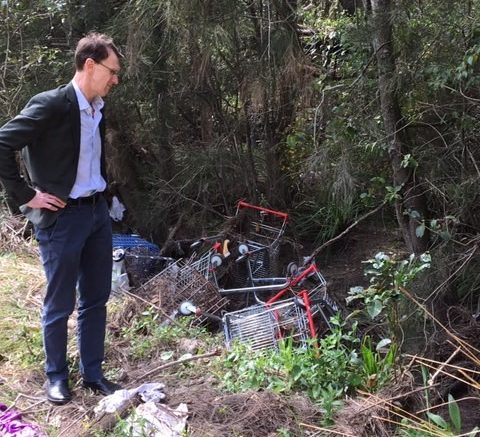 Dumped and abandoned trolleys continue to blight local streets and creeks because the NSW Government has delayed the introduction of new laws that would fine supermarkets for the dumping.

On November 19, 2021, the NSW Parliament passed new laws which give local authorities the power to fine the owner of the trolleys.

The new law has languished since November and without it being rubber-stamped, under the existing Impounding Act, the Council is left to pick up the cost of removing the trolleys.

The reforms are expected to reduce the cost of dealing with dumped trolleys.

Member for The Entrance David Mehan has called on the NSW Government to speed up the proclamation of the Act.

“These delays are unacceptable,” he said.

Mehan said abandoned shopping trolleys were a real blight on the beauty of The Entrance electorate with his office receiving many complaints from constituents on the matter.

Addressing the issue has been difficult for local authorities who under the existing Impounding Act 1993 can only fine those caught in the act of dumping trolleys leaving the trolley owner with no obligation to do anything.

Many trolleys are left uncollected, particularly around Bateau Bay Square where dumped and rusted trolleys clog the nearby creek.

“This Act was passed by Parliament last year and should be given effect now so we can clean up dumped trolleys on the Central Coast,” said Mehan.