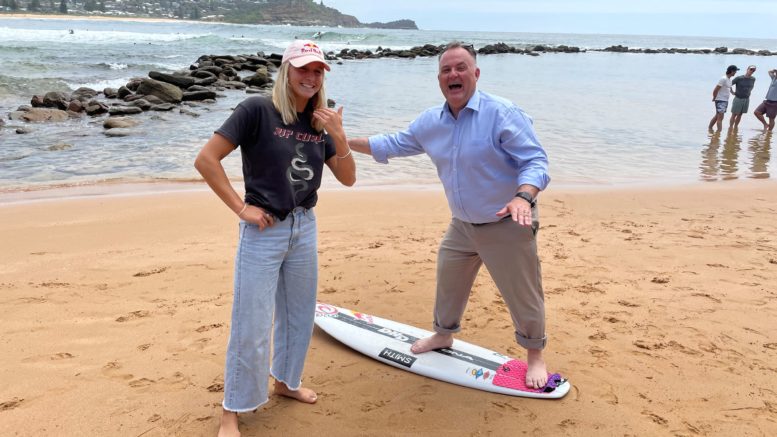 Some of the world’s top surfers will flock to the Central Coast early this year when the NSW Pro Surf Series returns to Avoca Beach thanks to a new three-year partnership between the State Government and Surfing NSW.

Australian and international surfers will have the chance to gain ranking points and prize money in the WSL Qualifying Series.

Crouch said he looked forward to seeing Avoca Beach packed with competitors and spectators again, after a tough few years.

“Having hundreds of competitors and spectators descend on Avoca Beach not only showcases our beautiful region to the world but injects significant tourism dollars into local businesses, accommodation providers, restaurants and retail,” he said.

“The Central Coast is the perfect location for this event and I look forward to seeing our beaches and incredible local Central Coast talent featured on the world stage once again.”

Crouch said the series would have a huge impact on the region’s economy as it recovers from COVID-19 lockdowns.

He said the total prize pool would be $30,000 for both men and women, with the series one of the first surfing events to introduce pay parity.

Picklum, originally from Shelly Beach and now living at Terrigal, won the Central Coast qualifier last year in a hard-fought battle with Avoca’s Macy Callaghan and said she was looking forward to competing again.

She has recently returned from several months overseas competing in the 2021 Challenger Series, an international surfing competition which saw events in California, Portugal, France and Hawaii from mid-September to early December.

While her performance did not result in Championship Tour (CT) qualification for Picklum, she said the tour had been invaluable.

“I achieved what I hoped to and surfing those beaches, especially in Hawaii, had a really positive impact on my confidence,” she said.

“It was really important to fly the flag for the Central Coast.

“When I look at how far I’ve come in the past 12 months I’m excited to see what will happen in the next year.”

Picklum said pay parity in the sport was extremely important.

“It’s not as much about the money as it is about making female surfers feel valued,” she said.

Minister for Jobs, Investment, Tourism and Western Sydney and Minister for Trade and Industry, Stuart Ayres, said the partnership with Surfing NSW cements the state’s position as the premier destination for surf tourism in Australia.

“The NSW Pro Surf Series brings recreational tourism and economic benefits to our surfing communities by providing a coastal road trip for visiting surfers to explore the variety of breaks and experience NSW’s unique surfing culture,” he said.

“These competitions will provide $1.48M in visitor expenditure to NSW coastal communities at a time when they need it most, which makes this partnership with Surfing NSW another important step forward in the recovery of the state’s regional tourism industry.

“We are incredibly blessed in NSW to have some of the most spectacular coastlines in the world to host world-class surfing events.”