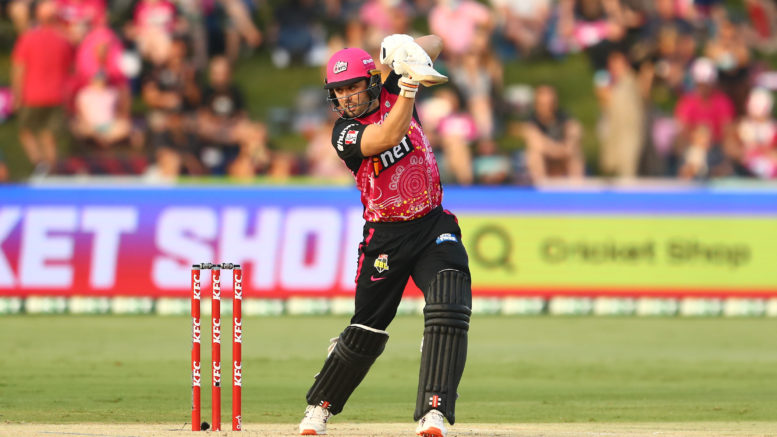 Justin Avendano opens the batting for the Sydney Sixers against the Perth Scorchers, Sunday January 9

Whilst COVID-19 continues to deplete team sheets in the Big Bash League, Erina Valley born and raised Justin Avendano was called up this year to play for the Melbourne Stars and then the Sydney Sixers and has hopes for more top grade T20 opportunities on the horizon.

The initial call up into the BBL was a surprise even following his grass roots playing for Terrigal-Matcham Cricket club and strong recent form in the NSW Premier First Grade.

“I actually got the call sitting on the couch in the Blue Mountains from the batting coach of the Melbourne Stars,” Avendano said.

“He told me they were playing tomorrow at 3pm, and I was thinking, ‘it’s six o’clock at night, I’m in the Blue Mountains three hours away from home, I’m going to have to sort my stuff out!’”

“I got home at about 2am, packed bags, got an early flight to Melbourne and then played the next day at the MCG, which was absolutely incredible, in a derby match, where there was about 30,000 people spectating.”

The change of pace from relaxation to big bashing was a factor in Avendano’s low run rate against the Melbourne Renegades and the Perth Scorchers.

When his contract shifted to the Sydney Sixers ahead of their clash against the Scorchers, his performance improved to 23 runs from 22 balls, including two fours and one six.

Avendano is awaiting another chance to line up with the Sixers, hopeful to find his stride as an opening batsman.

He is also a prospect in the mix of pool players who may be called into teams for the finals if COVID causes the regulars to miss out.

“I could be playing against one team tomorrow and then potentially lining up in the Quarter Final with them two days later.

“I’ve got no idea who I’m going to be playing with in a week’s time, which is really exciting but also a bit ridiculous.”

The BBL’s approach to overcoming COVID may be unusual but the opportunity was well earned by Avendano on the back of his leading overall run score in the NSW First Grade with the UTS North Sydney Bears.

After six matches this season for the Bears, Avendano earned a total of 434 runs, inclusive of two centuries, one half-century, an average innings of 72.33, a strike rate of 110.7 and an innings high score of 171.

The Terrigal-Matcham product found the time recently to return to his junior club and compete with the T20 team as the marquee player (guest player from another league).

First grade captain, old friend of Justin and man about Terrigal-Matcham club Alex Patterson commented on what this return meant for the club on and off the pitch.

“Justin’s been looking really good, though every time he’s played (for us) it’s been in difficult conditions: wet and overcast so the wickets haven’t been super good to bat on.

“We’re blessed to have a player like Justin who is willing to give up his time to come and play with us and have the odd training session.

“He’s very generous with his time and it means a lot to the club to have someone who has come through our juniors and gone on to play high level cricket.

“Then to see him come and give back to our community – I guess that’s what you want in community sport: guys who can make it on the TV and then give back to their cricket club.

“This year we’ve run some junior academies for our youngest players, aged eight and nine plus, and he’s always happy to come down for an hour or two and run some batting drills for the young kids and they love having someone that they’ve seen on TV.

“For some of the younger guys who are transitioning into higher level competitions, he’s always happy to spend some time with them.

“I think he enjoys seeing guys do well from the Central Coast, especially the Terrigal area, so he’s always happy to go down to the nets one on one with them and give them some advice, throw some balls to them, which a lot of guys like that aren’t always willing to do.

“From a team perspective, it’s unfortunate we don’t have him (anymore), but I think everyone wants to see him play at that level (BBL) and we think he deserves to be there.

“We are really happy to see him get a few opportunities and hopefully he can get some more.

“Even though we won’t have him for the last few games, to see him play on TV is pretty special.”