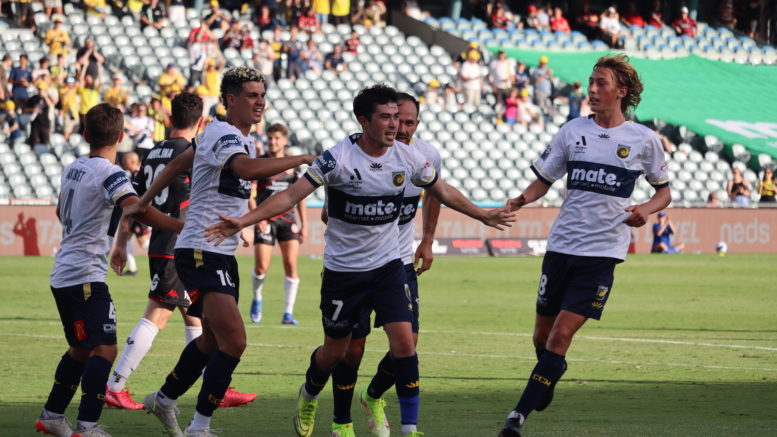 Cy Goddard scores his debut goal for the Mariners in front of a home crowd. Image CCN

Saturday, December 18. A second win in a row was secured by the Central Coast Mariners, confidently defeating the Western Sydney Wanderers, 2-0, at Central Coast Stadium.

It was an afternoon of milestones for the boys, who substituted yellow for white in the intense Christmas heat – holding its radiance for a 30 degree plus evening through to sundown.

Debuts were had for new signing, Nicolai Müller, back from injury to play against his former club, and Academy product, Manyluak Aguek, as well as a return from a minor injury for Beni N’Kololo to play his first game in Gosford.

With an unchanged starting eleven from last weekend’s win against Sydney FC, the Mariners were immediately faced with a high energy start from their opposition, eager to counter their hosts’ recent knack for scoring early in the half.

Both teams found promising goal scoring positions early, although execution of the final touch became a persistent issue along with wilting in the heat.

A deadlocked half time score gave little suggestion as to who would break away in the final 45.

With the resumption of play, the game continued to turn in the favour of the Mariners, yet it was not until the 59th minute that Goddard finally found the breakthrough.

It was another example of successful team passing play and composure in possession as the ball was moved around confidently by the back five, until the quick feet of Joshua Nisbet struck through the centre of the Wanderer’s defence.

A leading pass down the line found Lewis Miller on the edge of the box who, repeating his low cross assist from the previous week, this time thread the ball through to Goddard advancing unchecked at the far post.

A first time boot from the international import thud the ball hard against the crossbar before raining down deep into the net, giving no chance to Wanderer’s keeper, Tomás Mejías Osorio.

The ex-Wanderer found no love from his former teammates who raised their physicality to chase the game, leading to multiple fouls conceded in the final third of play.

Deep into injury time, an illegal tackle against Nisbet set up Bozanic to once more try his luck from the free-kick, this time wheeling the ball with animosity to see it fly over the defensive wall and well out of Mejías’ reach.

The final whistle followed shortly to secure three points for the Mariners, pushing them up into fourth place with nine points behind Macarthur in first with 13.

The next day, Coach Monty shared his thoughts on what he saw as a solid performance that will set his team up well ahead of a mid-week clash in the FFA Cup tournament.

“It was definitely challenging conditions for everybody; I don’t think I remember a game even when I played as hot and sticky as that one,” Monty said.

“Obviously the heat really effected both sets of players – after 15-20 minutes the game slowed down… but I thought that if we got through to half time and regrouped, I knew the impact the subs could make in the second half.

“I was really excited for Cy to get his first goal with a fantastic finish, and for Oli on his 100th game to pop up at the end with that one, which he’s been very close to on quite a few occasions this season,  and I’m really happy with a clean sheet and proud of the boys again.”

With the A-League result secured, the Mariners turn their attention to Tuesday evening’s FFA Cup Quarter Final clash against the Leichhardt Tigers, scheduled for 7:30pm at Leichhardt Oval.

“48 hours from now (Sunday) is a long time, so we’ll come in tomorrow and pick a team,” continued Monty.

“There might be a couple changes coming in to freshen people up after a heavy period but we’ll definitely go into the game as strong as we can and look to get a result.”

This match will precede the team’s next A-League contest against Wellington Phoenix to be played at Central Coast Stadium on Monday, December 27.