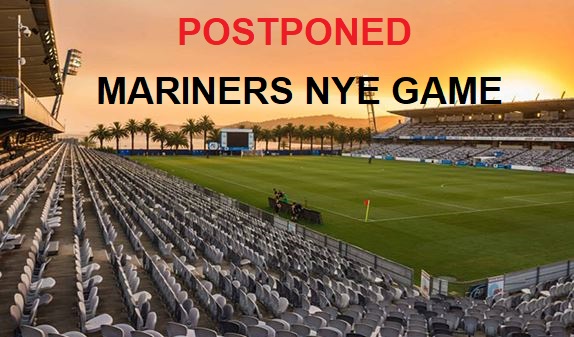 The Central Coast Mariners 2021 NYE game has been postponed.

The highly popular New Year’s Eve game at Central Coast Stadium between the Central Coast Mariners and the MacArthur Bulls has been postponed due to the proliferation of COVID in the Mariners’ camp.

Following the recent postponement of the Round Six Isuzu UTE A-League Men’s match between the Central Coast Mariners and Wellington Phoenix, the Mariners can confirm that more positive cases of COVID-19 have arisen within the camp.

These positive cases have been confirmed through PCR and Rapid Antigen Testing and those who have unfortunately tested positive to COVID-19 are now in isolation as the rest of the players and staff continue to monitor their own symptoms.

As a result of this, with the Mariners unable to field a side, the New Year’s Eve Isuzu UTE A-League Men’s fixture between Central Coast Mariners and Macarthur Bulls has been postponed.

The club’s first priority is to ensure the safety of the players and staff and they would like to wish a speedy recovery to those who have tested positive to the COVID-19 virus.

This was a particularly difficult decision to make knowing the tradition and importance that the Central Coast community place upon the New Year’s Eve fixture and the opportunity it presents to spend time with family and friends on the Gosford waterfront with the fireworks overhead.

Unfortunately, the fireworks that were originally planned for the event following the match will now be cancelled, however, the midnight fireworks at Drifter’s Wharf with Hermitude will still go ahead as planned.

The Central Coast Mariners would like to thank you for your understanding and patience with the club through this challenging period and hope you stay safe.

It has been reported that ticket holders will be given new tickets to the game when it proceeds.

As an additional measure for staff safety, the Central Coast Mariners office at Tuggerah will be closed until 3 January.