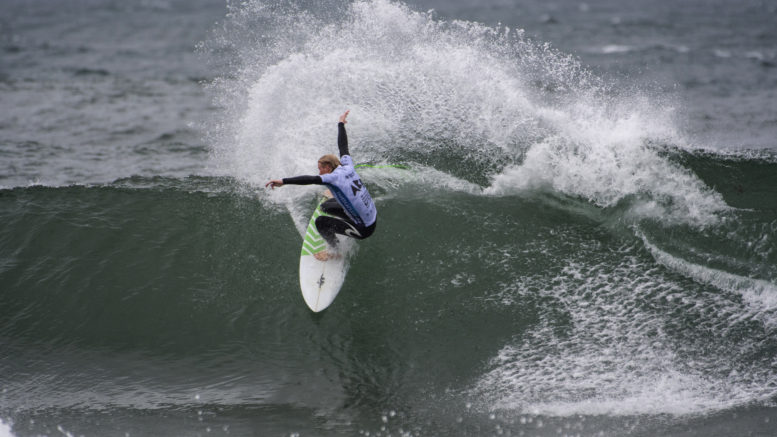 The Australian Boardriders Battle Central NSW regional qualifier was well performed by North Shelly and Avoca boardriding clubs, the former making it as far as the Semi-Finals.

Difficult surf beneath southerly winds pushed the semi-professional surfers to the brink of their strength and talent, often trapping them in the white water.

This heavy swell offered up either high or low scores without any in-between, depending on whether the competitor was able to keep their feet and see the wave through to its close.

For the final, the competition was between the Northern Beaches clubs more familiar with the point break at Warriewood’s southern end, with North Steyne and North Narrabeen Boardriders placing first and second.

North Shelly was best served by the Vaughan brothers, Joel and Hughie, with Joel Barry improving throughout the day.

Their opening heat was a difficult match-up against three Northern Beaches clubs ending in a fourth-place finish with a five wave total of 16.40.

In the following repechage heat, the team improved to score 23.06 and place second behind eventual winners, North Steyne.

Advancing through to the Quarter-Final, North Shelly improved for a total of 24.47, with J Vaughan first scoring 7.17 and then returning as the team’s chosen power surfer for a 7.10.

Grom surfer, H Vaughan, scored his best result of the day worth 6.03 points, showing control and maturity on the lip of a five foot plus wave.

Another second-place finish behind North Steyne brought North Shelly into the second Semi-Final heat where strong opposition coming from Mereweather dropped them down into fourth and elimination.

J Vaughan performed with confidence but was unable to land his best opportunities; meanwhile J Barry earned his best score of 5.00 with a couple of agile bottom turns.

Although holding onto second place up to the final 10 minutes, North Avalon and then Mereweather overtook them, the former advancing with North Narrabeen into the Grand-Final.

The result for North Shelly was disappointing, despite showing the team’s willingness and ability to improve throughout the day in competition against the talented cluster of clubs in and around Manly.