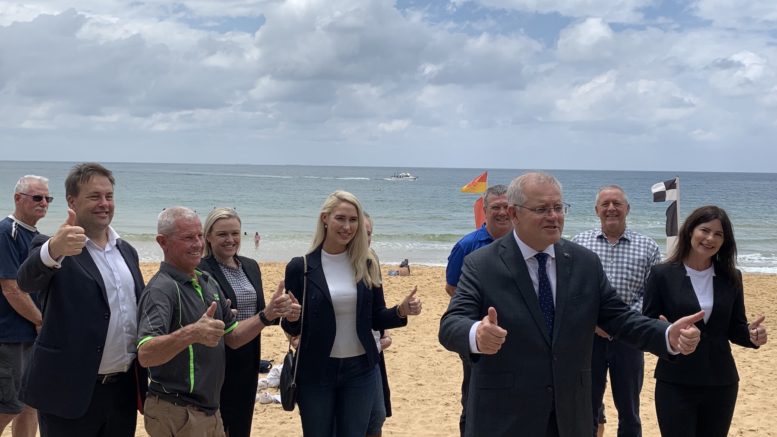 The Prime Minister, Lucy Wicks and supporters at the Terrigal announcement to stop PEP11.

The Federal Government announced last week it has taken the first steps towards cancelling the PEP-11 permit for offshore gas exploration over an 8,200 square metre area from Newcastle to Wollongong, with waters off the Peninsula a possible drill site.

Labor and independent candidates for the Federal electorate of Robertson said, however, they were unconvinced by the declaration and permit holder Asset Energy also claims the fight is not over.

The permit expired in February, with an application for renewal hanging in the balance for 10 months as environmental groups and residents waited for Federal Resources Minister, Keith Pitt, to sign off on a refusal.

Prime Minister, Scott Morrison, announced last week at Terrigal that the Government, which includes Minister Pitt, has advised NSW Deputy Premier Paul Toole as the joint authority partner, as well as the National Offshore Petroleum Titles Administrator (NOPTA), of its intention to refuse the renewal application. NOPTA, as the regulator, will grant the applicant 30 days to respond to the notice of intention to refuse the application.

But with permit holder Asset Energy (a subsidiary of Advent Energy) foreshadowing a “consultation and assessment process that could take several months” and Labor candidates for Robertson remaining cynical, doubts are emerging that a final resolution will be reached before the next Federal election, which will take place by May next year.

Morrison said last week that while gas is an important part of Australia’s current and future energy mix, this is not the right project for the “pristine beaches and waters” off the east coast of NSW.

He said the major reasons for refusal were high levels of community opposition and the fact the Government was not satisfied that the applicant is able to raise sufficient funding to progress the work.

Member for Robertson Lucy Wicks, who was with the Prime Minister, said the move was an “important decision” for the Central Coast and reflected the “values and care” the community has towards the environment and oceans.

But Asset Energy Executive Director, David Breeze, said the announcement ignored science and the need for gas and the company looked forward to working with NOPTA and the Government over an “assessment process” he said could take “several months”.

“Asset energy has at all times followed correct procedures and due process in seeking to retain our rights to explore much-needed gas resources offshore nsw.

“Asset has the technical expertise and has demonstrated the financial capacity to complete the proposed exploration program in a timely and safe manner.

“I hope that throughout this process, the country’s commitment to independent, science-based regulation of energy resources will prevail, not any short term or political decision-making.” he said the proposed exploration zone was more than 20km from the coast with estimates indicating there was enough gas there to provide energy to NSW for more than 20 years.

He said while drilling for gas, asset energy also intends to explore the potential for carbon capture and storage (CCS) in an area about 100km from some of Australia’s largest CO2 emitters.

He acknowledged that many in the community have genuine questions about the activity and said the company will respond in a forthright and truthful manner.

“But it is important that we have a public discussion which is grounded in fact,” he said. “factually inaccurate, politically motivated or exaggerated claims cannot be allowed to distort debate.” he said many business organisations, community leaders and political representatives support the

“Need to capture the economic, energy and environmental benefits of the activity we propose”.

Independent candidate for Robertson, Vania Holt, said of the announcement:

Holt said Morrison has done what Keith Pitt could have done in February with the stroke of a pen. “so, why do it in robertson, why do it now, and why the big performance?” she said. “Is it because there’s an election imminent?

“Is it because the liberal party fears Lucy Wicks will lose her seat after voting against Zali Steggall’s anti-PEP11 motion in parliament?

“Is it because they are under pressure from strong, independent candidates right up and down the coast?

“and is Keith Pitt’s silence on being overruled by the prime minister part of the peace deal with Barnaby Joyce in the coalition’s civil war over climate policy?” Holt said we need to see “how this process plays out and whether it remains unresolved after the election”.

“what is apparent is that the only long-term solution to protecting our environment is a permanent ban on fossil fuel activities along our coast, and the only sure way of achieving that is through a strong, independent representative,” she said.

Labor candidate for Robertson Dr Gordon Reid was equally cynical, saying the announcement was “Nothing but a statement of intent”. “The central coast community has come together these past 10 months to oppose offshore drilling, and the government continues to string us along” he said.

“I remain incredibly sceptical about this announcement. “this community is entitled to be very sceptical too; promises have been made before with no results. “as far as I’m concerned, this is still a waiting game for our community who have clearly and overwhelmingly voiced their opposition to PEP-11.”

A spokesperson for the Department of Industry, Science, Energy and Resources confirmed, on December 20 the titleholder has been provided 30 days in which to provide a response to the notice of intention to refuse, prior to the joint authority making a decision.

Minister Pitt declined to comment. Details on the status of PEP-11 can be found online at the NEATS portal.

1 Comment on "Candidates not convinced by PM’s PEP11 announcement"