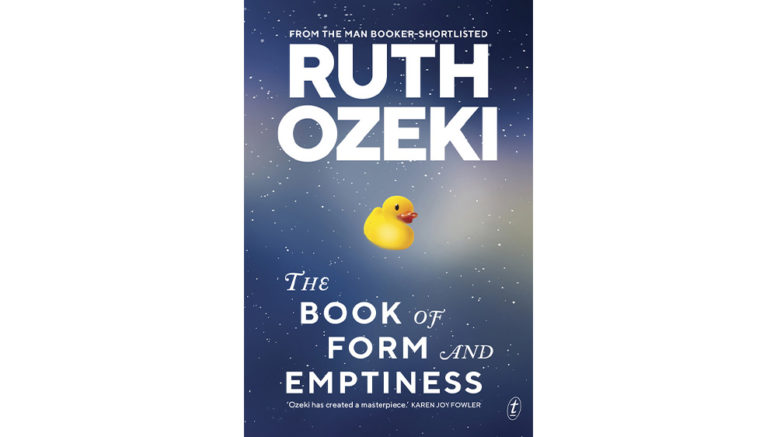 This is a big book!

And when I say big, I mean big because it is over 500 pages.

I mean big in the sense of the themes – death, grief, mental illness, the art of decluttering, drug use.

The list goes on. I am telling you it is big.

Benny Oh and his mother Annabelle are trying to come to terms with the loss her a father and husband, Kenji Oh, in a tragic accident right near their home.

It is after his father’s death that Benny starts to hear objects talk to him:

“When did he first hear them? When he was still little? Benny was always a small boy and slow to develop, as though his cells were reluctant to multiply and take up space in the world. It seems he pretty much stopped growing when he turned twelve, the same year his father died and his mother started putting on weight. The change was subtle, but Benny seemed to shrink as Annabelle grew, as if she was metabolizing her small son’s grief along with her own.”

Annabelle has become a hoarder and the piles of possessions are taking over the house.

At least Benny’s room is neat and tidy, an oasis.

But the objects won’t stop talking and while some of them say innocuous things, there are more ominous ones, like a pair of scissors.

Annabelle’s job is becoming redundant but she has managed to talk her boss into retraining her so she can still work.

The pressure of paying bills is becoming too daunting.

And now, “No-Good”, the landlord’s son has his eyes on evicting her so he can sell the house.

The area is gentrifying, he is sure to get a good price.

He also wants Annabelle to stop feeding the crows but how can she, they are her friends and bring her presents.

The noise becomes too intense and while Benny’s father’s old headphones help sometimes, he eventually seeks refuge in the library.

He wasn’t a reader but “Soon discovered that when he was reading to himself, all the other voices in his head grew quiet and still.”

He falls in love with an artist that has named herself The Aleph and owns a ferret.

He meets a homeless poet who is confined to a wheelchair.

For the library is much more comfortable than the judgement of his peers.

Kids can be cruel.

Benny then starts to ask himself “What is real?”.

Benny’s book tries to help him with the answer.

The story is told by Benny’s book (with some chapters from Benny himself).

“Every book has a question at its heart, and that was yours.”

The book has to be “real, even if it hurts.”

It seems that Benny is the only one that can help his mother.

But why won’t his therapist believe him?

The characters are quirky and loveable, and the story is at times sad, at times uplifting and topical (a Zen monk who helps people declutter!).

It’s about a book, telling the story of a boy who is going through a lot.

It’ so well written it makes you just want to put your arms around Benny and tell him everything will be ok.