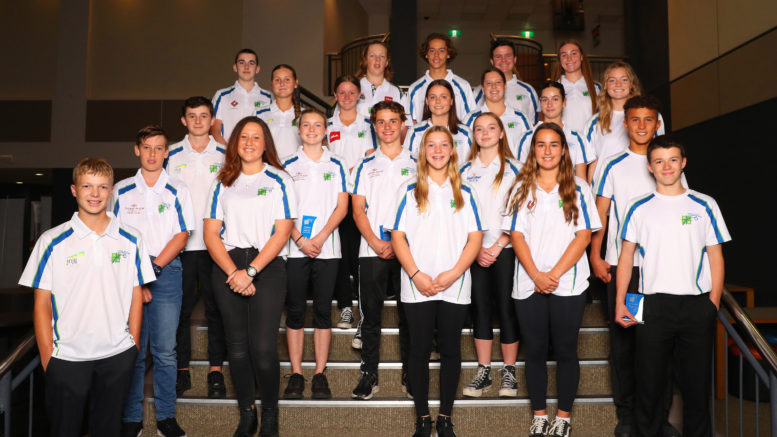 Young golfer Riley Millers has been named Central Coast Academy of Sport’s Athlete of the Year.

A CCAS spokesperson said the 15-year-old’s amazing list of results made him a stand-out at the VIATEK Central Coast Academy of Sport Awards evening.

“Most impressive of all, Riley made it to the quarter finals in the NSW Men’s Amateur Matchplay Championship – an amazing result for a 15 year old,” the spokesperson said.

“It has earned him numerous accolades including scholarships to the JNJG Nomads, with Avondale Golf Club in Sydney and into the JNJG Development Squad.

“Riley is and always has been the model squad member, always ready to go at training, eager to learn, courteous and respectful.

“He has managed to lower his handicap down to an amazing +1 after shooting 66 6 under par at Kooindah Waters in early August.

“He is definitely a young star on the rise and we will be watching with great pride to see how far he will go.”

The awards ceremony was held on November 10 at Mingara Recreation Club.

The awards evening was the second stage of a restructured awards presentation this year, with athletes of the year winners and encouragement award winners in all sports programs, previously announced on social media, in the running to be named Athlete of the Year.

The Chairman’s Award went to Brandy Simpson for touch football.

“Brandy has been an integral member of the CCAS Touch football program over the last two years,” the spokesperson said.

“She is a phenomenal athlete who has demonstrated all the attributes necessary to deserve this award.

“Brandy has showed qualities of leadership within the group and puts in 100 per cent effort each and every session.”

The Ray Sandell Dedication to Sporting Excellence award went to Dylan Littlehales (para-canoe), Matt Dawson (hockey) and Nicola McDermott (high jump), all of whom have excelled in their chosen sport and represented Australia at the recent Tokyo Olympics:

“Peter’s coaching philosophy … is underpinned by the importance of education: learn the right way to achieve better results and work on establishing solid foundations,” the spokesperson said.

“Peter tells us that 95 per cent of all problems can be tracked back to poor alignment, posture or grip … sound fundamentals (which remain) a key to an athlete’s success.”

Cliff has been involved with the Central Coast Academy of Sport Golf Program for 15 years, the past seven as the Program Head Coach.