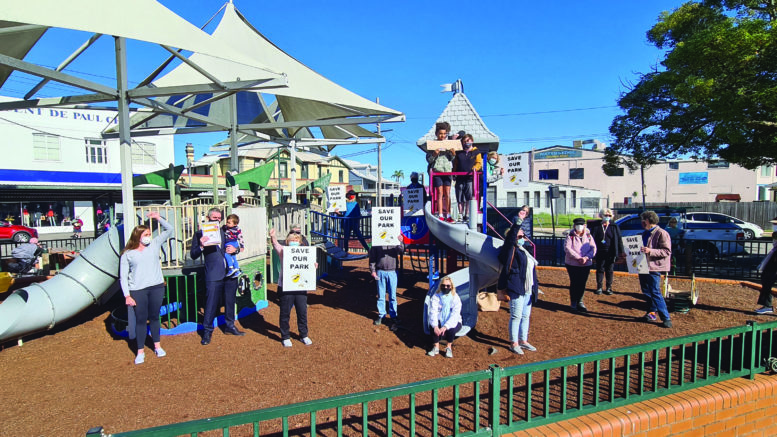 Vital infrastructure such as playspaces could be at risk

Central Coast Council has joined forces with 53 other councils to oppose what Local Government NSW (LGNSW) calls a “cash grab” to rob communities of vital infrastructure.

Scott said the NSW Government had yet to back down on proposed rule changes impacting infrastructure contributions by developers, despite vocal opposition, with more councils voicing their opposition each week.

“They also want developer contributions to bypass councils and go straight to the State Government, with no guarantee the money will be spent in the area from which it was collected.

“The community expects local infrastructure funds to be invested locally in a fair and transparent manner – not hoarded for potential pork-barrelling.

“Communities deserve to have a say in how planning rules impact on them, and that’s why we need to take our advocacy against this move public.”

Scott said a ‘Say No to The Contributions Cash Grab’ campaign was being rolled out across the state through social and mainstream media.

“Regional councils are experiencing significant tree and sea-change growth, particularly in the wake of COVID pandemic lockdowns, so these proposed rule changes have everyone deeply concerned,” she said.

“We want to work with Government to drive a locally-led economic recovery from the pandemic, but this is being put at risk by these ill-considered planning rule changes.”

Scott said the development industry had also expressed grave concerns with the Urban Task Force’s September 17 newsletter stating: “It is becoming evident that this entire process is simply a tax grab – from new home buyers, from developers, from local Councils and from communities”.

The Central Coast Council Administrator resolved to write to the Minister for Planning and Public Spaces and the Minister for Local Government requesting that the draft Bill be withdrawn pending reviews and further analysis.

Council resolved to support LGNSW in calling for modelling of possible impacts, further details and an extensive consultation process with local governments and industry.

“Infrastructure contributions are an important element of the planning and development system, allowing funds to be secured from developers to contribute towards essential local infrastructure to serve growing populations,” the Administrator’s Minute said.

“Importantly, contributions reduce the financial burden of providing such infrastructure on local governments.

“Council has supported recommendations that reduce the complexity of the system, improve transparency and equity, and ensure robust financial arrangements.

“Certain elements of the draft Bill do not align with these outcomes.

The Minute says the matter highlights the broader issues councils are continually faced with.

“The framework local government operates under is archaic, restrictive and conflicting,” the Minute says.