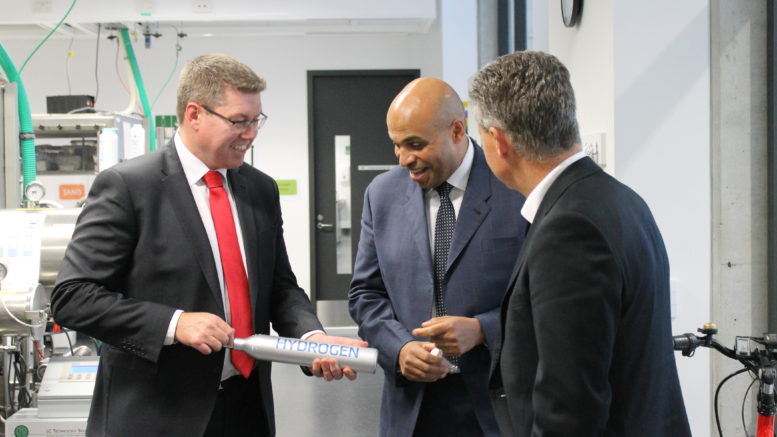 Federal Member for Shortland, Pat Conroy, is in Glasgow this week representing Labor and the Central Coast/Hunter region at the climate change conference, COP26.

“Decisions made at this conference will have a profound impact upon Australia and especially upon our region,” he said.

“Carbon intensive regions like ours must be at the forefront of considerations, so that’s why it’s really important that I’m over there explaining that.

“People on the Central Coast have strong views on climate change and are profoundly impacted, so it will be useful for people to understand,” he said.

Conroy, whose Shadow portfolios include International Development and Assistant Shadow Minister for Climate Change, is the only Labor MP attending and he is “reasonably sure” that this is the first time a Central Coast MP has represented Australia at a climate conference.

“I will be engaging with other delegates and stakeholders to hear about climate action their nations are taking and discussing the positive policies Labor has already developed,” he said.

Conroy said it was a massive privilege to be at the two-week event, which kicked off last week until November 12.

COP26 is the 26th United Nations climate change conference, officially known as Conference of the Parties, and often referred to as the Glasgow Climate Summit because this year it’s being held in Scotland’s largest city, Glasgow.

This year’s COP, which was held over from last year because of COVID, is even more important as it’s the fifth since COP21 in Paris in 2015, when the Paris Agreement climate treaty was agreed.

Under the Paris Agreement countries promised to strive towards limiting the rise in global temperatures to 1.5C above pre-industrial levels.

The fifth anniversary is important, as the agreement states that every five years countries must revisit their promise and, if possible, increase their ambitions.

A most important result of the summit will be the number of countries who pledge to reach net zero (or carbon neutral) emissions by 2050.

COP meetings put the international spotlight on each nation’s action, or inaction, on climate change and can be a powerful motivator to get countries with inadequate climate change policies to up their game.

Conroy is attending as an official Australian observer and although he’s not part of the negotiating delegation he will have direct access to most of the rooms where negotiations take place.

“You get a much better picture of what’s going on by being in the room, rather than on webcasts,” he said.

“I’ll also be talking to delegations from other countries to understand what their position is, what they’re doing around climate change and also how Australia is perceived.

“There’ll be forums and other things where I can present ideas, other than the official negotiating sessions, so there’ll be an opportunity to talk about what the focus will be on for my constituents.

“I represent an area that’s very coastal, defined by beaches and lakes, so we’re at the forefront of what’s going on in Australia, as well as obviously having people working in the power industry and coal mines.

“My electorate has a thousand coal miners that live here, we’ve got hundreds of power workers, thousands of manufacturing workers and a lot of people that live by the coast and lakes, so aspects of climate change will profoundly impact our region and we are really exposed compared to, say, electorates in Sydney or Melbourne.

“I’ve done a lot of work with a German climate institution because they’ve had similar challenges, so I’ll be talking from a base of knowing what coal miners feel and what they want to see from a government response.

“It’s important to relate it to what people go through every day,” Conroy said.

“In my meetings, I won’t be undermining Australia’s official position, people will understand that I’m there representing the alternative government, but people will want to know what will happen, what will Australia’s climate stance be should Labor win the next election.”

Conroy said Labor was committed to a more ambitious medium-term 2030 target on the way to zero emissions with a focus on opportunities moving towards renewable energy.

“I’ll highlight that we’ve put aside $20B for rewiring the nation to build electricity transmission lines we need to get more renewable energy into the grid and how that, combined with the $15B national reconstruction fund to boost manufacturing, will focus on Australia being a global leader in mining lithium, manufacturing batteries, being a really strong supply chain for all these clean industries.

“That’s the real difference from the Government’s official stance.

“It’s something where the Central Coast has a really good role to play because of its potential and given the region’s strong manufacturing base,” Conroy said.