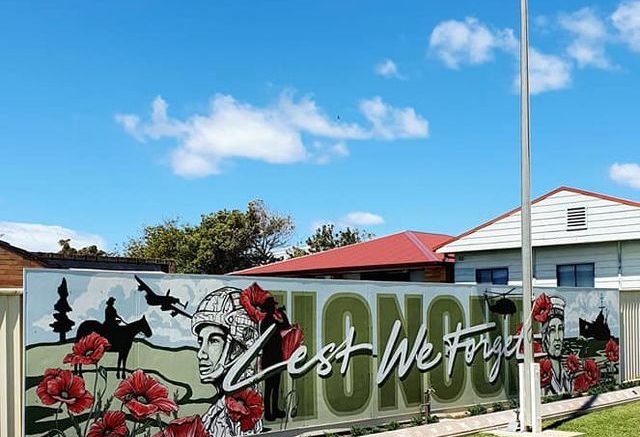 The new Honour mural at Toukley

Services will be held throughout the northern areas of the Central Coast to honour the lives of our servicemen and women next Thursday, November 11, as the region commemorates Remembrance Day.

At The Entrance Long Jetty RSL Sub-Branch there will be a service at the Cenotaph in Memorial Park where a wreath will be laid, the Last Post will be played, and members of the local clergy will be present.

The public will also be able to attend, and the Cenotaph will be surrounded by barricades with one entry and exit.

Attendees must sign in using a QR Code and they must show proof of vaccination.

“For those of us old enough to remember, Remembrance Day was once called Armistice Day and it signalled the end of World War 1; the war to end all wars where over 60,000 brave young Australian service personnel gave up their lives in service to the King and Country,” Wright said.

“At 11am on November 11 each year the country paused to remember the fallen.

“After World War II the Australian Government agreed to a request from the UK to change the name to Remembrance Day in order to commemorate those who lost their lives in both World Wars.

Toukley RSL Sub-Branch will also be holding a service at the Cenotaph for 50 members, guests and their partners.

They have also commissioned a new mural called Honour for their returned servicemen and women, as well as their comrades and the community.

Toukley RSL Sub-Branch President, Bob Wilson, said the piece is about the quintessential spirit of Australian soldiers; their steadfast, determined, tenacious and resolute attitude and presence in battle, but also their hopes and aspirations not only for security and peace, but for the prosperity and future of their country and its people.

“It’s a combination of silhouettes, portraits with sketched detail, land, sea, handwritten script and floral embellishment; it is intended to represent our past, present and future, what was and what we hope to be,” Wilson said.

“Referencing aspects of each service and our war history from G for George the World War II bomber to the courageous Light Horse Brigade and Lone Pine, the composition is softened by red poppies coming into full bloom.

“(The reason for) their inclusion is obvious – symbolising not only our losses on Flanders Field but Remembrance and hope, and life.

This commission pays tribute to the people as much as the wars they fought, then and now.

“They are our grandparents, fathers, mothers, uncles, aunts, sisters, brothers, daughters, and sons.

“We will remember them.”

At Ourimbah-Lisarow RSL, the Sub-Branch will hold a service in the club grounds that will commence at 10:50am.

“It’s hard to gauge how many people will be coming,” she said.

“Last year we had around 80 people attend, and this year we have some local schools coming like Ourimbah and Lisarow Public Schools and the school captains will be involved in the ceremony.

“Remembrance Day must be commemorated, just like ANZAC Day as we need to remember those who fought for our country and our freedom.”

Wyong RSL Sub Branch will commemorate the day with a small ceremony in the carpark for members.

Wyong RSL Sub-Branch Secretary Tony Drover, said the club will be laying a wreath in the carpark with around 20-30 expected.

“This year due to COVID, we’re keeping it small, and we’ll plan to do bigger services in the new year such as ANZAC Day,” he said.

“It’s very important to remember those who lost their lives during the wars and conflicts.”

Be the first to comment on "Pausing to remember"