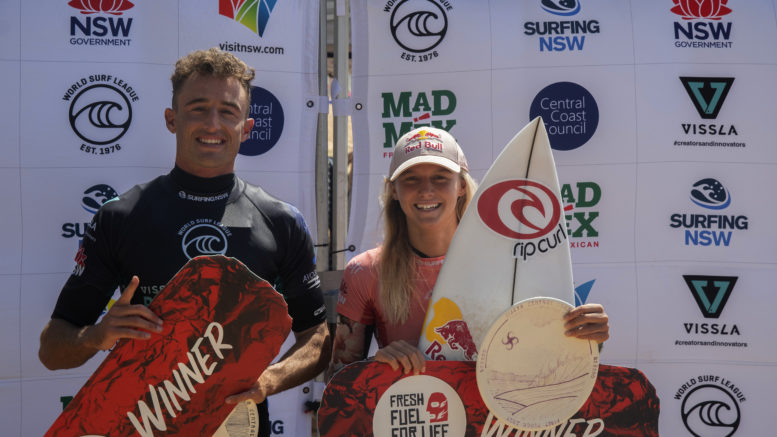 The World Surf League’s (WSL) 2022 competitive calendar for the Australian Summer-Autumn season will include 13 events between February and May, including the return of the Central Coast Pro from March 14-16.

This Qualifying Series (QS) contest at Avoca Beach will have 3,000 points on offer, commencing after four 1,000 point events at Phillip Island, Pacific Palms, Port Stephens and Maroubra; preceding two 5,000 point events on the Tweed Coast and finally in Newcastle.

As QS points are the sole tender toward Challenger Series (CS) participation, the Central Coast Pro will be hotly contested by a mix of Australia and New Zealand’s best surfers and may also open itself to local wildcard entries.

It may even prompt the return of Shelly Beach surfer, Molly Picklum, to reclaim her 2021 Championship, or that of Avoca Beach surfer, Macy Callaghan, who this year finished runner-up.

Picklum, Callaghan and Avoca’s Wade Carmichael remain active in the current 2021 CS in the hopes of qualifying for the top-level Championship Tour (CT).

If successful, they may avoid their home town Pro and focus instead on the Australian CT events: the Pro Bells Beach, Victoria from April 10-20 and the Margaret River Pro, WA from April 24 to May 4.

The 2022 CS will also travel the east coast, stopping for the Gold Coast Pro, Coolangatta from May 7 to 15 and the Sydney Surf Pro, Manly from May 17 to 24.

WSL APAC General Manager, Andrew Stark, was happy to herald in what will be the biggest consecutive run of WSL events globally in nearly three years.

“We had a good run of events earlier this year and are excited for even more action in the Summer and Autumn months of 2022,” Stark said.

“It’s going to be an exciting time not only for competitors, but for surf fans here in Australia and watching live around the world.”

The Story of Jim Bowcock, Part 2 (from A Pocketful of Yesterdays)